Two men armed with a baseball bat and a meat cleaver have made off with money and cigarettes after robbing an Auckland service station. 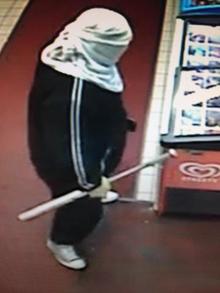 The two men were armed with a baseball bat and a meat cleaver and also had a hammer. Photo: NZ Police

Police said the pair also had a hammer when they threatened the sole worker at a Mobil station in Mt Albert early this morning.

Both men had their heads and faces covered when they went into the station just after it opened at about 6am.

Police said the men took off in a white sedan.

The number-plate was not clear despite being caught on a security camera, but the police think it could start with FHP9.