The police in Waikato have offered an unreserved apology to anyone of Irish descent after a man with a kayak lying sideways across his car's roof was stopped this week and presumed to be from the Emerald Isles. 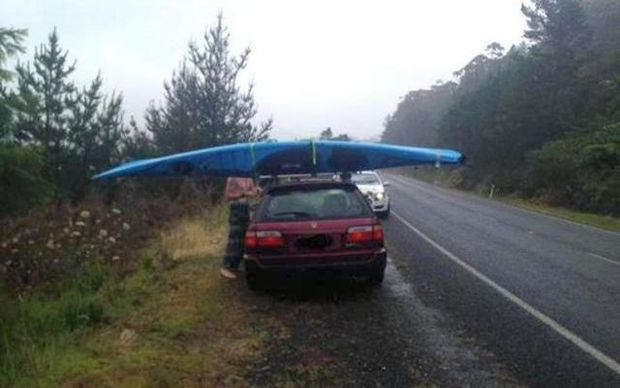 The car was stopped on the road between Kopu and Hikuai on Sunday afternoon. Photo: NZ POLICE

The district's road policing manager Freda Grace said the driver escaped a ticket because of what appeared to be a foreign accent.

She said the officer who stopped him believed a warning was better than a fine and thought she was enhancing foreign relations.

"Clearly it was never, never our intention to offend anyone.

"The intention was always that this was about road safety, and ensuring people can go about their duties in a safe manner."

His identity documents were not checked.

The driver was ordered to remove the kayak and told to head back to town to get suitable transport.

Ms Grace said while the man was a visitor to the region he was not Irish and the Waikato Police wished to say sorry to anyone of Irish descent they may have offended.

Inspector Grace said there had been no complaints from anyone of Irish descent about the original press release.