An Anglican minister says if the church wishes to be respected by Christchurch residents, it needs to rethink its stance on the quake-damaged cathedral. 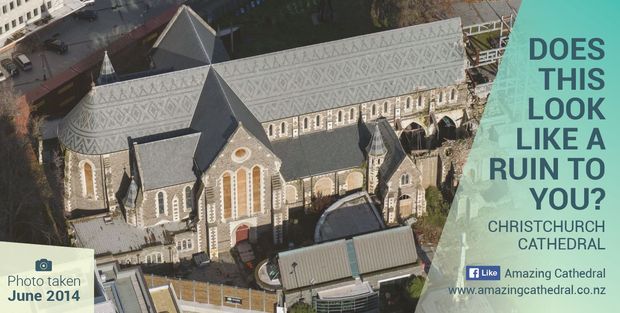 Billboards and flyers were put up around Christchurch to gather support for restoring Christ Church Cathedral. Photo: SUPPLIED

Christchurch cathedral, which was hit hard in the 2011 earthquake, is at the centre of a battle between its owner, the Church Property Trustees, and the Greater Christchurch Buildings Trust, which opposes its demolition.

The Buildings Trust released the results of an independent Colmar-Brunton poll today, indicating 51 percent of the city's residents want the cathedral repaired.

Two-thirds of those polled said they supported restoration if it was privately funded.

A member of the trust, the Reverend David Morrell, said the church should rethink its stance and engage with the wider community.

"If the church wishes to retain the respect - let alone the affection - of this city, it would be wise to reconsider its direction and engage in constructive dialogue with the town."

Some 1000 people were surveyed, and the poll has a margin of error of 3.1 percent.