Whitebaiters in Buller on the West Coast are demanding an end to the use of large sock nets to catch the delicacy in their area.

Lynley Roberts said she's collected close to 400 signatures on a petition calling on the Department of Conservation to ban sock nets. 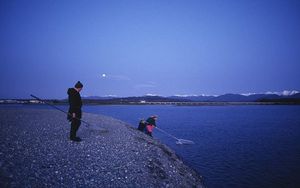 Whitebaiters in Buller on the West Coast are demanding an end to the use of large sock nets to catch the delicacy in their area. Photo: PHOTO NZ

She said the use of the nets, which she says can catch up to 200 pounds a tide, is greedy.

Ms Roberts said there won't be time to make any changes before the season starts in Buller on 1 September.

But she hoped the Department of Conservation will respond to her petition, and change the rules, by next season.

Whitebaiting season is off to an average start in some parts of the country because of bad weather.

A keen whitebaiter from Levin, Gerald Decastro, said the Manawatu River, where he normally goes, was swollen from recent rain.

"I did speak to a couple yesterday and they went and had a look and turned around and came back again," he said. "The Manawatu will be quite dirty and full of logs and other rubbish, weed and so on coming down, so it does take its toll on it."

The shorter whitebaiting season for the West Coast will begin on 1 September.