Staff at the agency which runs public transport in Auckland are being offered a shuttle service for business trips between offices, because buses and trains are too slow. 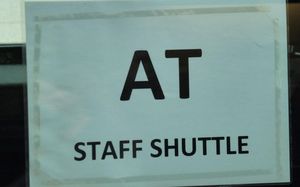 Auckland Transport (AT) is spending more than $122,000 over six months, trialling the shuttle between its downtown offices and its headquarters in Henderson.

Public transport advocates say staff travelling between the Henderson and downtown locations should be using the bus and rail services at the door of both offices.

AT wants to reduce its car fleet by 20 vehicles, and is encouraging staff to cut car use.

"We're providing options for staff, to have a tele-conference, to catch public transport using business AT HOP cards, and we're also providing a shuttle between Henderson and Britomart," AT community transport manager Matthew Rednall said.

But critics of the shuttle idea question why the staff are not using public transport. The Henderson office is the former Waitakere City Council headquarters, built alongside the railway station and bus interchange.

The downtown office in the HSBC building is directly opposite the Britomart train station. The shuttle parks on the other side of the building, behind the bus stop serving the 40-minute, twice-an-hour route to Henderson. 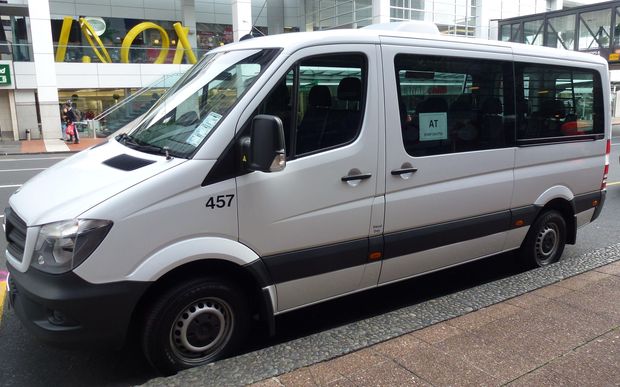 The shuttle being used to transport Auckland Transport staff between offices. Photo: RNZ

"There is public transport and we talk to our staff about using (it) but if we want to get the best productivity, we need to provide choices," he said.

However the travelling times were not always much different. When Radio New Zealand checked the shuttle's downtown arrival at 9am, it had taken 30 minutes, and the lone passenger said it sometimes took 40 minutes in congested traffic.

AT's main long-term goal is to double public transport patronage, and it has hired consultants to help it understand those it - and those who refuse to.

Matt Lowrie, who edits the Transportblog website. said the shuttle showed the agency was not in touch with its passengers.

"They should use the services that they are providing and get their staff to use them, and make them more desirable, because if staff want to use those services then the public will too," he said.

Cameron Pitches, from lobby group Campaign for Better Transport, said more AT staff on those services would help identify how to make them better.