Police had to separate anti-racism protestors and white supremacists in Christchurch on Saturday.

About 100 anti-racism protestors disrupted a rally by 50 white supremacists in Cathedral Square, saying they're worried about the message such rallies are sending to new immigrants to the city.

It's the second year the annual flag ceremony by the Right Wing Resistance has been visited by the protestors. 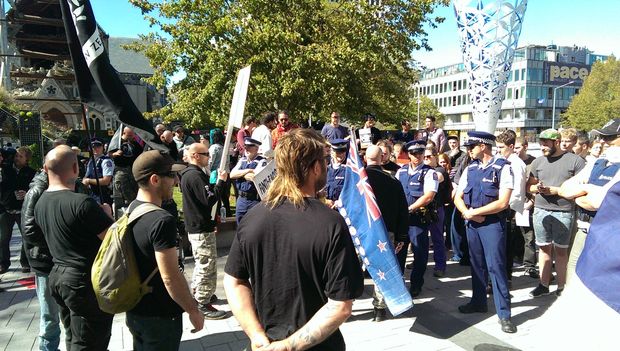 Right Wing Resistance spokesperson Kyle Chapman says the group is trying to stop his members from celebrating their colonial ancestry.

Mr Chapman says being anti-racist is the same as being anti-white and their opponents are therefore racists as well.

A spokesperson for the anti-racism protestors, Thomas Roud, says the racist ideology spread by Mr Chapman's group should not be tolerated.

He says activities of the right-wing group are frightening new immigrants to the city, and street patrols carried out by the group in the name of providing security are designed to intimidate people.

Mr Roud says free speech is important, but hate speech should not be allowed. Far right movements in Europe have been allowed to grow, he says, and while New Zealand groups remain small, it's important an effort is made to ensure they don't get any bigger.