The Dunedin City Council has confirmed an investigation into vending machines at its main swimming pool centres on a potential conflict of interest for the pool's manager. 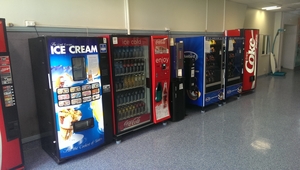 Some of the vending machines at the pool. Photo: RNZ

The council launched the inquiry last week into the contracts for snack machines in the lobby of Moana Pool.

The council has been asked about the vending machines and role of aquatic services manager Steve Prescott in stocking them for 18 months.

The council now says the four snack machines are stocked by a company of Mr Prescott's called Prescott Enterprises and he makes $6000 to $10,000 a year from the service.

It says that contract was drawn up in about 2000 and managers knew about it at the time.

Tony Avery, the council's general manager of infrastructure and networks, said on Wednesday an investigation now underway by the council's auditors is because previous answers to requests made under the Official Information Act may not have been answered correctly.

Mr Avery says the inquiry will look into whether there is a conflict of interest for Mr Prescott.

Mr Avery said he hopes the investigation can be done by Christmas - but for now, it is business as usual for Mr Prescott and the pool.