An Auckland council agency says it is not backing off boosting the growth of public transport, despite a report questioning how likely it is to achieve the long-term goals voiced by the city's mayor.

Financial consultants Deloitte say the city will be doing well to reach 100 million public transport journeys a year by 2022, which would be 40 million short of the goal set by the mayor Len Brown. 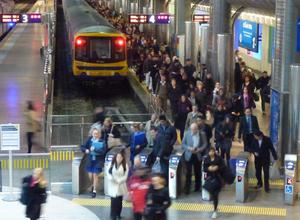 And the review for Auckland Transport says even that lower figure will depend on the city executing all its planned public transport projects properly, and on time.

Deloitte says growth on a scale proposed by the mayor has not been achieved in comparable cities, and far greater investment than has so far been planned would be needed.

Auckland Transport chairperson Lester Levy says the report provides valuable evidence about the task ahead, but the challenge set by the mayor remains alive.

"It is a significant challenge, not being achieved elsewhere," he says. "But it doesn't mean that we couldn't be the first people to achieve it.

"With this information, we need to step back and say: 'what else do we need to do?'," Dr Levy says.

Dr Levy says the consultant's report is cause to debate policies such as the Government's aim to cut the level of subsidy in passenger transport fares.

And Mr Brown says he has heard before the kind of comments in the Deloitte report, and he's sticking to his target of doubling commuter journeys.

Mr Brown says his target remains the challenge for Auckland Transport, even if its formal plans aim lower.

The agency is already trying to convince the council to provide additional funding, at the same time as central government policies aim to cut fare subsidies.