Launching his campaign on Tuesday, the Mana party candidate said Auckland Council had land available for his programme. 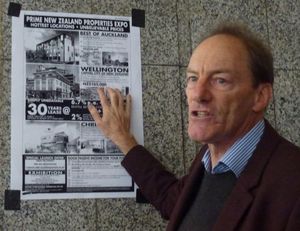 Mr Minto said the ambitious home building programme would need a $200 million kick-start and further funding would come from a levy on land that he said developers sit on while prices rise.

He said half of developments of 10 more dwellings should be genuinely affordable homes, and he also wants the Government to allow the council to control rents.

Mr Minto told supporters too many homes are being bought by investors, and the party would "finish that with a decent, tough capital gains tax to drive property investors out of the housing market in Auckland."

Mr Minto also wants a Charter of Rights for those who rent homes in Auckland, guaranteeing standards, and tenure of tenancies.