The developer planning a 27-storey waterfront hotel in Dunedin is taking its case to court. 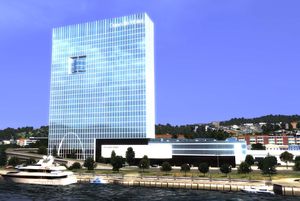 The five-star hotel and apartment complex has been hotly debated since being announced in 2012.

A Dunedin City Council resource consent panel turned down the $100 million project on 5 June this year, saying it had failed a key legal test.

The panel found the 96-metre glass tower planned for Steamer Basin was too high for its industrial-zoned site.

But the company behind the project, Betterways Advisory Ltd, is pushing on and late on Tuesday afternoon announced it would lodge an appeal against the decision in the Environment Court.

The appeal means the court will attempt to broker a compromise between the developer, the council and any other public submitters who want to get involved.

But if that fails, the court will have to hold its own full hearing into the project, probably early in 2014.

"They were disappointed by the decision, as we all were. It took me a couple of days to get over it, then you've got to think about it logically.

"The overwhelming support that they feel they have got from many people within the city - the business community as well as privately - has just given them the encouragement that they need that they don't want to give up, they want to carry on."

Mr Rodgers would not give details of the grounds of the appeal, but said it was against the whole decision.