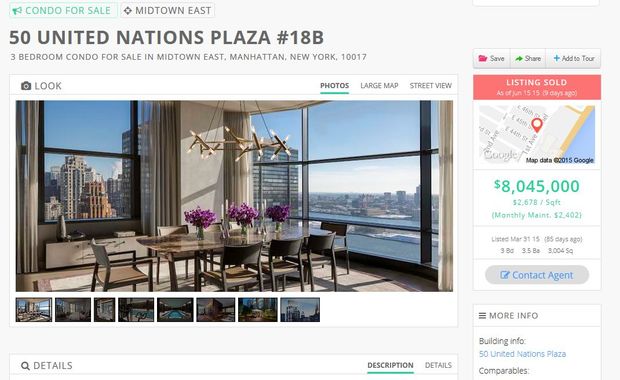 A screenshot of the listing for the apartment, described as "suitable for entertaining on a large scale". Photo: blocksy.com

The $11 million flat is set to be the new home of New Zealand's representative to the United Nations, Gerard van Bohemen.

Located on 50 United Nations Plaza in the Turtle Bay neighbourhood, the 278 square metre apartment has three bedrooms and three-and-a-half bathrooms and overlooks the East River. 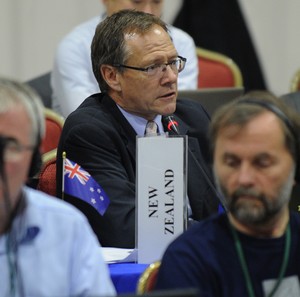 Gerard van Bohemen - pictured during a meeting of the International Whaling Commission in Panama in 2012. Photo: AFP

Labour Party foreign affairs spokesperson David Shearer said the apartment block was home to some of Hollywood's A-listers, and questions whether it was the right place to buy.

In a listing, the apartment is described as "large and impressive," suitable to for entertaining on a "large scale".

It has floor-to-ceiling deep bay windows, with "stunning views overlooking the East River and the United Nations Secretariat Building".

The master bathroom has "city views as it's backdrop," featuring a white marble, heated floor, and the building has a 75-foot swimming pool, sauna, and gym.

A spokesperson for the Ministry of Foreign Affairs and Trade (MFAT) said the flat cost $10,975,228 million, and will be a working space as well as a residence.

He said it was decided to sell the old residence in the city because of high ongoing maintenance costs and the distance from the UN building.

"New York property costs are high and growing, and it was determined that the purchase of a new property represented better long-term value to the taxpayer than leasing a property," he said.

"The Ministry's independent external advisors - the Overseas Property Advisory Panel - endorsed purchase as the preferred option. The cost of the new property will be offset by the sale of the old residence."

But the spokesperson would not say how much the old property is selling for.