The Prime Minister has downplayed the size of any possible taxpayer funding for New Zealand's America's Cup challenge, saying it would be more conservative than the Government's last contribution. 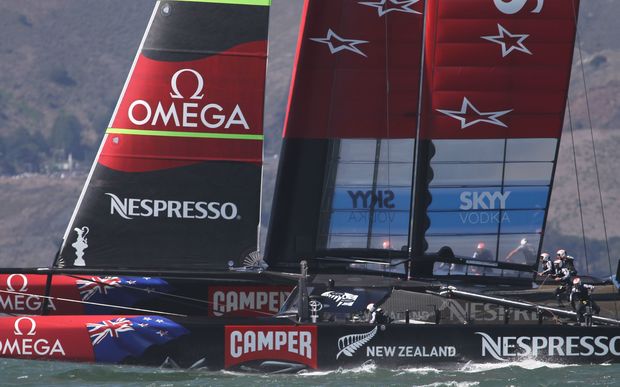 Emirates Team New Zealand battled it out against Oracle Team USA in San Francisco in 2013, but lost the series. Photo: AFP

Taxpayer funding is now looking more and more likely with reports in overseas media that Auckland will be on the list to host a build-up regatta after Sydney pulled out.

Economic Development Minister Steven Joyce said if New Zealand played a hosting role that would enhance the case for a government contribution.

"Certainly holding a significant part of the regatta, less than half of it's still significant, in Auckland, with Oracle for example racing which I think is the proposal I think that would be very positive from New Zealand's perspective.

"So look, we just have to wait and see and let them make their decision and announce it," said Mr Joyce.

Prime Minister John Key was asked whether taxpayers would be happy to fund what many saw as a sport for the very wealthy.

"I think if we have some of the series here then that makes it easier for the Government to put some money in.

"Certainly you know there's been obviously discussions and negotiations and in the fullness of time we're a bit caught by confidentiality agreements by when they are lifted, the Government will be able to give its response," said Mr Key.

In 2011 the Government announced it would put $36 million towards the 2013 New Zealand campaign.

Mr Key was asked whether that could be matched this time around.

"Ahh, I wouldn't want to comment on that just at this moment, you know, we are um, we're taking a fairly conservative view to it I think is the way I'd describe it."

Labour Party leader Andrew Little said there would have to be a good case for any taxpayer contribution.

"It's a sport that looks like a rich man's game - big flash yachts and well paid crew.

'I think what we do need to consider however is if we support a team and particularly if we host the series here is whether New Zealand boat builders and their suppliers and component manufacturers and sail-makers and all the others get an opportunity to showcase their skills and their technology here," said Mr Little.

Labour's America's Cup spokesperson Trevor Mallard was more enthusiastic, saying he believed the case for funding did stack up.

"During the last Cup the Government got a lot more in PAYE and GST as a result of America's Cup activity than they put in by way of support, so effectively we got the exposure for free," he said.

Mr Mallard said he had been confidentially briefed by international contacts about the America's Cup arrangements, including where the qualifying regatta would be held.

When asked if he has briefed his leader Mr Little, Mr Mallard only said that he did not 'breach confidences'.

Mr Joyce said he expected an announcement from America's Cup organisers 'reasonably soon', but didn't have a specific date.