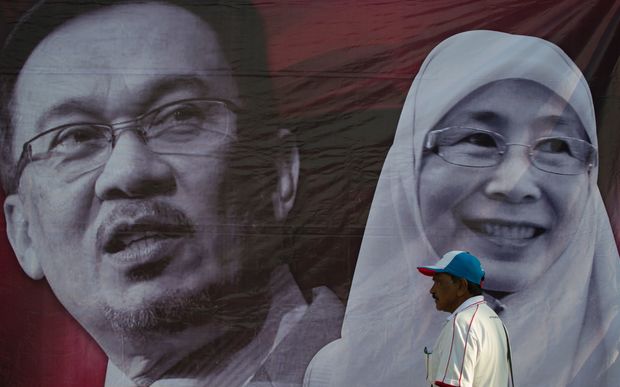 A supporter walks past a banner of Malaysian opposition leader Anwar Ibrahim (left) and his wife Wan Azizah at the Federal Court on 10 February. Photo: AFP

Mr Anwar was convicted of sodomy but his case is largely seen as a political campaign to undermine the political opposition in Malaysia.

Sodomy is illegal in Muslim-majority Malaysia but very few people are ever prosecuted.

Mr McCully said the severity of Mr Anwar's sentence, coupled with recent prosecutions under Malaysia's Sedition Act, were of concern.

Other countries, including the United States, had also expressed their disappointment.

The Government had registered its concern with the Malaysian Government and would continue to do so, he said.

Anwar Ibrahim said he was disgusted by the court verdict.

He said the five judges of the Federal Court had sold their souls to the Devil.

The opposition leader said the charges were trumped up and designed to end his political career but he would not be silenced.

The Malaysian Government said the court was independent.