The British Government has presented a plaque to the New Zealand Parliament to commemorate New Zealand's World War I Victoria Cross recipients. 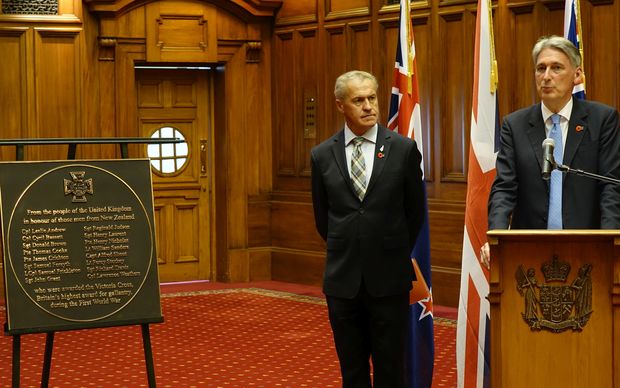 The British Foreign Secretary Philip Hammond made the presentation on Tuesday morning to the Speaker of the House David Carter.

The plague has been inscribed with the names of the 16 Victoria Cross recipients from New Zealand and would be incorporated into the restoration of the Cenotaph at Parliament.

Philip Hammond said the gift celebrated the shared achievements between Britain and New Zealand during World War I.

"A day to remember the men who left these shores a hundred years ago for the other side of the world, believing rightly that they were fighting a just cause."

He said he honoured the memory of the 18,500 New Zealanders who did not return.

"The war in which they fought shaped the world in which we live. This plaque bears the names of all of the 16 recipients of the Victoria Cross from New Zealand in World War I. Each one is a story of courage, compassion and sacrifice."

Speaker of the House David Carter said a very special position had been reserved for the plaque at the Cenotaph.

He said it would be there for people to visit and record those very significant names.