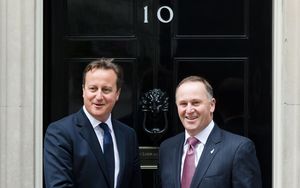 The International Democrat Union represents more than 50 parties; its executive members meet twice a year to exchange views on policies.

John Key takes over from former Australian Prime Minister John Howard, who had been in the role for 12 years.

Mr Key said he was encouraged to take over by Mr Howard and British Prime Minister David Cameron.

The National Party was a founding member in 1983, along with British Prime Minister Margaret Thatcher and the then US Vice-President George Bush Senior.