Labour leader David Cunliffe is moving to distance himself from the party's Rangitata candidate Steven Gibson and is not encouraging anyone to vote for him. 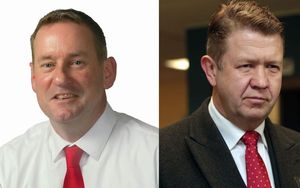 Mr Gibson yesterday criticised Labour for being too respectful of National and said that the party was not going to win the election by being "softly-softly".

He also said he was concerned about the "degradation of the public's confidence in the democratic process by Judith Collins, Cameron Slater, Jason Ede and what he called "other rotten Shylocks".

Mr Cunliffe last month put Mr Gibson on a final warning when he called Prime Minister John Key a Shylock and a nasty little creep, as it was at odds with Labour's 'Vote Positive' campaign.

Mr Cunliffe said it was too late to stand Mr Gibson down from the election.

"He has had his last chance. This is now a matter for the party president and I've spoken to her. We're campaigning hard for the party vote (and) he's unlikely to make it to Parliament."

Mr Cunliffe refused to say whether people in Rangitata should vote for Mr Gibson.

"People will make up their own mind. We want their party vote."