Minister for Economic Development Steven Joyce is dismissing the the Green Party's environment policy as a cartoon-like approach to things. 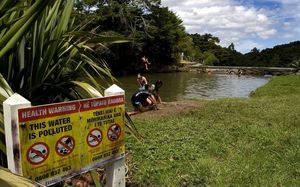 The Greens have launched part of their environment policy, which they say would make all rivers safe for swimming.

They want to introduce national water standards setting maximum levels for contaminants such as nitrogen, and limiting the volume of water that can be taken from some rivers.

The party co-leader, Russel Norman, said the minimum standards proposed by the Government would make water safe only for wading or boating.

He said such low standards would mean people would have a high chance of catching a gastrointestinal bug.

"What the National Party is saying is that they want the national minimum standard for rivers to be so polluted, that even if you touched a river you would have a one-in-20 chance of serious infection, vomiting and diarrhoea."

Mr Joyce says everyone agrees river quality should improve, but they don't agree on how it should be done.

"For example a blanket ban on all bans on all rivers is - look it's just like a cartoon, it's just like saying 'don't get out of bed in the morning'."

Mr Joyce says there has to be balance, and change can't be made without consideration of the impact on industry.