The Labour Party president, Moira Coatesworth, says this year's election will go down to the wire. 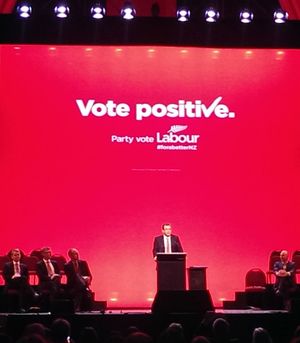 The party held its election-year congress in Wellington on July 5th and 6th and said Labour's unveiled its campaign slogan which will be Vote Positive, with a social media hashtag of #forabetterNZ.

Ms Coatesworth told party faithful that they will have to go out and work harder than ever to ensure a change of Government.

The party's leader, David Cunliffe, said it was possible Labour could buy back some former state assets if it wins power.

Labour strongly opposed the partial sale of assets by National and has been challenged several times to pledge to buy the assets back if the party's feelings are so strong on the issue.

Mr Cunliffe was asked on TVNZ's Q and A programme on Sunday whether he would buy back those assets.

He gave his leader's address on Sunday afternoon, and unveiled Labour's education policy, including plans to reduce class sizes by funding more teachers.