The Government has accused the Labour Party of being in disarray, after two of its MPs voted against their party to support the logging of fallen trees on conservation land.

Legislation allowing the harvest of native trees felled by a cyclone in April on the West Coast was passed by 65 votes to 51 under urgency on Thursday night.

Prime Minister John Key says Labour has tried to appease the Greens by voting against the bill, while trying to preserve the other MPs' credentials on the West Coast. Mr Key said he thinks people will consider Labour barking mad for voting to leave the timber to rot on the ground.

"What that shows is the level of dysfunctionality, the extent of division within a party that in just three months time seeks to be the government of this country."

Other Labour MPs had accused the Government of opening up the conservation estate by stealth. Mr O'Connor said he could understand their mistrust.

Mr O'Connor dismissed the suggestion the Labour Party was in disarray, and told Radio New Zealand's Morning Report programme he was grateful his party had allowed him vote on his conscience. 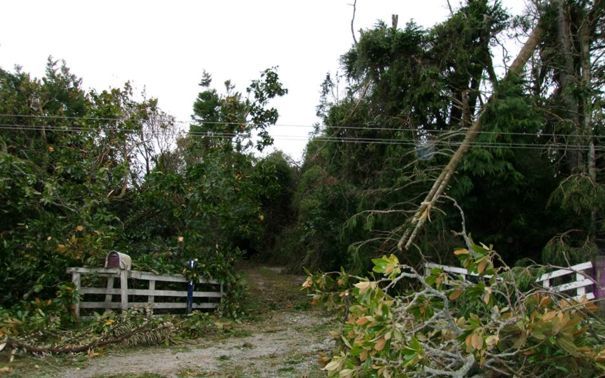 Storm damage to trees during the cyclone in April. Photo: SUPPLIED / Shona Rathgen

On Thursday, environmental group Forest and Bird said the urgent legislation was a smokescreen to allow loggers access to rimu forest on the West Coast.

Advocacy manager Kevin Hackwell described it as a cover.

"We're saying it's a smokescreen. The urgency issue is basically a way of getting what is really controversial legislation through, and getting it done and dusted with a minimum of public scrutiny - that's what they're wanting. And there should be public scrutiny."

Mr Hackwell said the law changes will end a 27-year period in which loggers' chainsaws have not been heard on conservation land.

The tree species ordinarily protected from logging on conservation land include totara, matai and rimu.

South Westland landowner Ken Arnold said downed trees were still lying on farm and conservation land surrounding his property. He said rather than rot into the ground, the trees could be logged to benefit a range of organisations.

"If possible they should be able to be utilised and turned into some form of generation of dollars for whichever party is concerned, be it the Department of Conservation or you know scenic values or the councils or whoever it is" he said.