The Government is pressing ahead with its policy of using one organisation to support several government departments, despite criticism from the Auditor-General.

Two years ago, the Treasury, State Services Commission and Department of Prime Minister and Cabinet combined their human resources, finance and IT functions. 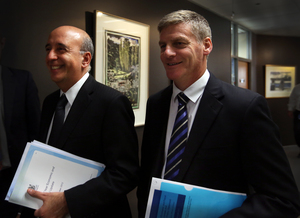 The merger was supposed to be a trailblazer, showing other departments how to save money by cutting duplication and increasing efficiency.

But a report by Auditor-General Lyn Provost said "important and fundamental aspects of the change were not done well".

The merger was not well planned, consultation was poor and important skills and knowledge were lost, it said. It also detailed severe and unsustainable work pressures on staff.

It said baseline data was not adequately collected before the merger to allow its performance to be measured.

Ms Provost said the system was failing to consistently provide services at the level expected by users, and that systems to support or sustain the current activities were not in place.

However, Prime Minister John Key is undeterred by the criticism.

"Sometimes when you get the mergers of back offices or other functions within government, it doesn't always go perfectly, but actually in the private sector sometimes those mergers don't go perfectly either. I guess the question is, in the long run is it worth it - and the view of the Government is that it is."

The Government has other shared services programmes, with separate organisations handling procurement, IT and property management for several government departments, and these are continuing.

"People didn't buy into it. Morale is low. It hasn't met its targets. That's got to be sobering reading for public service chief executives."

Treasury chief executive Gabriel Makhlouf said he accepted that things could have been done better and said he took responsibility on behalf of himself and the two other chief executives involved.

Mr Makhlouf apologised to staff who felt they had had to go though a tough setting-up phase and said conditions had improved since the audit was carried out before Christmas.

"We've now got a clear vision. Management's been there now a while. We've actually expanded recently. So those faults were there at the beginning ... but I'm very confident in the people that I've got there now."

"The Government has taken its eye off the ball, has not paid close enough attention to this, did not give it sufficient guidance and strategic direction and now the whole exercise is running to justify itself."

New Zealand First leader Winston Peters said the Government should to take responsibility for the mess. "Why didn't they discover how inefficient ... the operation was? They should do their job."

Mr Peters said he did not believe anyone would be held accountable for the bungled merger, or that anyone would lose their job because of it.

The agencies behind the merger had hoped it would as act as an example for other public entities to follow but the Auditor-General warned it is yet to prove that it's an effective model.