The Government is being accused of sitting on its hands while debt rises and with interest rates set to rocket. 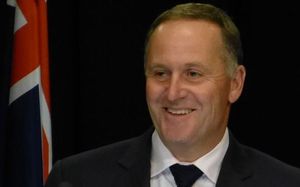 The Prime Minister delivered a pre-budget speech in Auckland on Wednesday in which he downplayed any expectations of an election year spend-up.

John Key told a business audience on the North Shore on Wednesday that once the surplus has been achieved, the Government can start getting its debt down. But it was important to continue to control spending so that pressure is not put on interest rates.

Mr Key said there may provision for modest tax cuts from 2015, but there none will be contained in this year's Budget.

Mr Key said that in the last five years of the last Labour government, new spending averaged $2.7 billion a year, whereas under his National government it has averaged just $250 million a year.

Mr Key said government spending as a proportion of economic output is forecast to be 30.6 percent this coming year and to fall below 30 percent after that.

But his media conference outside his electorate office in Auckland had to be cut short after an irate motorist pulled over and began hurling abuse at the MP.

$1b of new spending in Budget

The Budget will be presented on 15 May and it would include about $1 billion of new spending.

The Prime Minister said the extra spending would mainly focus on health and education. He also announced that New Zealand Trade and Enterprise will get an extra $69 million over the next four years to boost its work promoting trade.