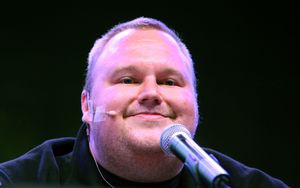 The man the FBI is trying to extradite on charges of being an internet pirate launched the party at his Coatesville mansion near Auckland on Thursday and introduced a smartphone app that people can use to become party members - a first for New Zealand politics.

The Internet Party already faces an uncertain future, with no confirmed candidates and not enough members yet to be formally registered ahead of the election on 20 September.

Plans to campaign under an umbrella group with the Mana Party are on hold.

New Zealand is part of the Five Eyes intelligence network with Australia, Britain, the US and Canada.

Mr Dotcom told reporters the Internet Party wants to create a society that is open, free and fair - and that includes reviewing New Zealand's security arrangements.

Internet Party chief executive Vikram Kumar repeated earlier claims that several MPs are interested in joining, but won't say who they are.

"I'm not commenting on that. At the moment it's exactly what Kim has said, which is that there is a sitting MP who has firmly expressed interest and that three more were thinking about it. That needs to play out a little bit more before we can actually say much more."

Mr Kumar believes the party can still do well, even though the election is only six months away.

Mana wants commitment - or no deal

Mana Party president Annette Sykes is ruling out an alliance with the Internet Party unless it commits to helping the poor and opposing the National Party.

The Internet Party had initial discussions with Mana about forming an alliance for the election on 20 September. However, Ms Sykes told Radio New Zealand's Morning Report programme on Thursday that unseating National from Government and supporting the poor are bottom lines for Mana.

Ms Sykes says Mana is waiting for the Internet Party to clarify its position on those policies before discussing an alliance any further. However, she says the parties have common ground on internet security and privacy.

Mana leader Hone Harawira says he wants the Internet Party to rule out a post-election agreement with National - otherwise, any deal between them is off.

The Internet Party said it was not in a position to give any commitment about which parties it would or wouldn't work with after the election.

"No I think it's too early for that. We're not even registered yet," chief executive Vikram Kumar told Morning Report. "It's going to take about six weeks to get registered and once you have members then you have an executive council. It's not before that will there be any discussion or decision about post-electoral arrangements."