Prime Minister John Key says the appointment of former Alliance Party president Matt McCarten as Labour's chief of staff will see the party career off to the hard left. 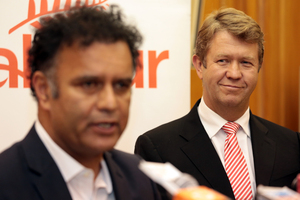 A pleased-looking David Cunliffe with his new chief of staff. Photo: RNZ

On Wednesday afternoon, Labour leader David Cunliffe announced the appointment - the fifth to the job since the 2011 election. Mr McCarten gets the position despite not supporting Mr Cunliffe for party leader last year.

Mr Cunliffe says Mr McCarten is one of New Zealand's pre-eminent political strategists on the left side of politics and is a good fit for the Labour Party.

"Matt has always served progressive causes which have had the interests of working New Zealanders and the underprivileged at heart and this is part of that movement. I believe there's a strong alignment of our values and our cause."

Mr McCarten stood as an independent MP in the 2010 Mana by-election and was involved as a strategist with the Mana Party after its formation in 2011. More recently he has been the national secretary of the Unite union. At a news conference he said he was committed to Labour under Mr Cunliffe.

Mr Key says Mr McCarten comes from the hard left, so the tone for Labour will be much more aligned with the Green Party. He says that will have a certain appeal to a small audience of New Zealanders, but most will see it as bad news for jobs, economic growth and a competitive economy.

The Prime Minister describes Labour as a mess. "They've taken a long time to get their press team together, they've gone through now a couple of chiefs of staff, their caucus is not at all united, it's very divided, and I think they're going to struggle to keep control of that caucus."

The chief of staff coordinates the activities of the party's parliamentary wing and liaises with the wider party. It is not a public role.

Those who have done the job since the last election include former MP Stuart Nash. The position has been vacant since Wendy Brandon left for health reasons.