Green Party co-leader Metiria Turei says the bullying and attacks on her personally by National ministers have been happening for the past year.

Mrs Turei believes she is being singled out by government ministers for personal criticism and there are other MPs who speak out against poverty but no one is subjected to the same attacks. 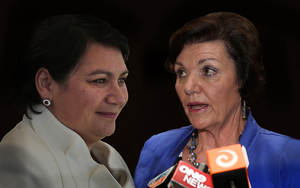 Police and Corrections Minister Anne Tolley on Thursday said Mrs Turei is being hypocritical by lecturing about child poverty. The minster said she was insulted to be told how out of touch she is by a list MP who lives in a castle and wears $2000 designer jackets.

Mrs Turei told Radio New Zealand's Checkpoint programme that other women in Parliament shop at the same stores as she does and speak out about poverty, but don't receive the same criticism. She says it can only be racism.

"I am the only one to which they have directed these very personal and very petty attacks. The only difference I can see is the fact that I'm a Maori woman from a working class background. So I can't come to any other conclusion."

Mrs Turei says she dresses appropriately for a professional job. She denies owning jackets costing $2000, but said what she wears is irrelevant to her message.

"I think its very demeaning for Cabinet ministers to be focused on the way someone is dressing and not on the important issues that are facing the country."

Mrs Turei said their behaviour amounts to bullying, but Prime Minister John Key supported his ministers on Friday and said that's not the case.

"Go back and play the file footage and see who says the hardest, often nastiest comments. Almost always comes from the Greens - they go really hard."

Mr Key said it is not appropriate to characterise his ministers' comments as racist.

Judith Collins on Friday called Mrs Turei a hypocrite for spending a tremendous amount of money on clothing while talking about child poverty, while Ann Tolley said she was simply pointing this out also on Thursday.

"She can wear whatever she likes, I don't have a problem - but don't come to the House and accuse someone who's an electorate MP for an electorate where there are some very poor (people) - I work with those people on a regular basis - and try and tell me that I'm out of touch," Ms Tolley said.