United States Secretary of the Interior Sally Jewell has thanked the New Zealand Government and the Pacific Islands Forum for taking a strong stand against the use of chemical weapons in Syria.

Ms Jewell was speaking at the forum's annual summit in the Marshall Islands.

"As the US prepares to hold the Syrian government to account, it's very, very important that the international community speaks with one voice and says we cannot accept this kind of behaviour and the use of chemical weapons against civilians anywhere on this planet." 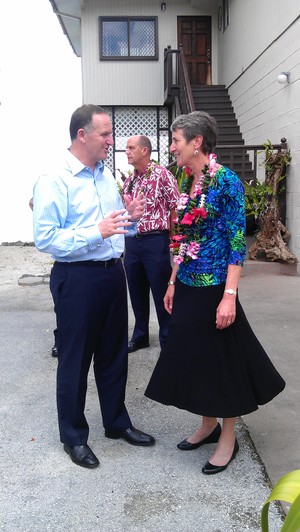 John Key and Sally Jewell at their meeting in Majuro. Photo: RNZ

Prime Minister John Key would not be drawn on what kind of support New Zealand would give the US if it intervened in Syria.

But he says what has taken place in Syria is outrageous and New Zealand understands the frustration the US is potentially feeling over the inaction of the United Nations on the matter so far.

Key says Cameron will continue to make case against Assad

Earlier, John Key discussed Syria with his British counterpart David Cameron in a phone call from the Marshall Islands.

Mr Key says during their conversation on Thursday night, Mr Cameron told him he accepts the direction of the British Parliament, which voted against any action without a UN mandate.

"And he accepts that that means the United Kingdom wouldn't be involved directly in some sort of surgical military attack if that took place on Syria but that won't stop him continuing to make the case of why he believes the Assad regime is responsible for the chemical attacks on Syria."

Mr Key says Mr Cameron intended to present evidence to that effect at the G20 meeting being held in St Petersburg.

The New Zealand Prime Minister says the British vote clarified the position of the British Parliament for Mr Cameron, and it would take a major event in Syria for that vote to be revisited.