Prime Minister John Key says a referendum on the Government's asset sales programme is a waste of money but one will be held in the next 12 months, now that enough signatures have been collected to trigger one. 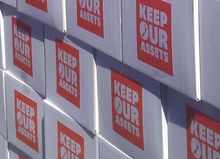 Organisers of the Keep Our Assets petition have succeeded in their second attempt to gather enough signatures to force a referendum. The first time the petition was presented to Parliament it fell short of the numbers needed but Clerk of the House Mary Harris says she is satisfied the threshold required has now been met.

It is estimated that 327,224 eligible electors have signed the petition - 18,500 more than required.

The Government has a month to set a date for the non-binding referendum, which is likely to be held in the next 12 months. The Electoral Commission has advised that the cost of holding a postal referendum would be about $9 million and the best time to hold one would be late this year, or early next year.

Mr Key says the referendum is an utter waste of money. "We've had a referendum," he says, "it was called a general election, and National won that election on the back of this major policy plank with an overwhelming majority - the biggest result we've received in MMP history. So it isn't like this is something that wasn't fully debated."

Mr Key has also rejected calls by petition organisers to suspend asset sales until the referendum can be held, and says the partial float of Meridian Energy will go ahead. Mighty River Power has already been partially sold.

Both parties say Meridian's share float must be put on hold until after the referendum.

The referendum question is: "Do you support the Government selling up to 49% of Meridian Energy, Mighty River Power, Genesis Power, Solid Energy and Air New Zealand?"

One of the petition organisers, Grey Power president Roy Reid, says he was confident they had the numbers needed to force a referendum this time. "If we'd got a wrong batch or a poor batch again we could have ended up the same way," he says. "But that's fine; we've passed the target. We now look forward to the Government announcing a date for the referendum."

Mr Reid also says the asset sales programme should be put on hold until the referendum is held.