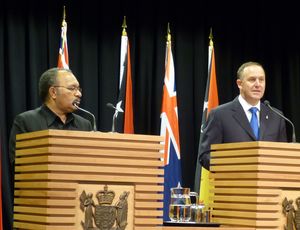 Peter O'Neill and John Key at a news conference in the Beehive. Photo: RNZ

As part of the Australian government's policy to deter boat people, Australia has an agreement with Papua New Guinea that anyone seeking asylum in Australia will be sent to the Manus Island detention centre.

Those found to be genuine would then be settled in PNG or another country but not in Australia. All others would be returned to their country of origin or sent to another country willing to accept them.

During a visit this week by PNG Prime Minister Peter O'Neill, Mr Key was asked whether New Zealand would consider taking any of those refugees. He replied that it would be possible but they would not be considered as part of the 150 refugees New Zealand has already agreed to take from Australia as part of its annual UN quota of 750.

"Of the 600, technically speaking," Mr Key says, "if the UN came along and said 'We've got some people here and we want to recommend them to New Zealand', like they could out of the Sudan or anywhere else, technically they'd be part of the 600."