Labour Party MPs are to meet on Tuesday afternoon to vote on the leadership after David Cunliffe failed to pledge his unqualified support to leader David Shearer.

Mr Shearer is expected to ask for a vote of confidence from more than 60% of his MPs to secure his leadership.

Under existing rules, Mr Shearer needs only a simple majority to stay in the job. 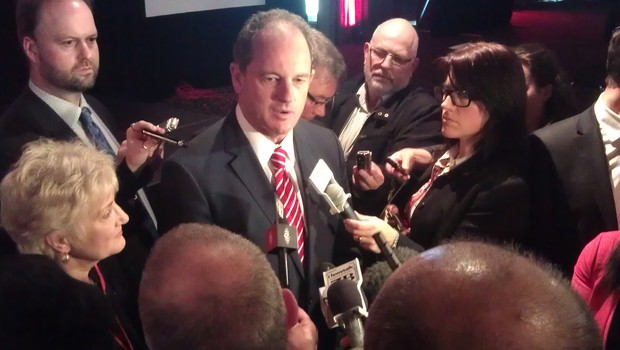 David Shearer said on Monday he has the support of the majority of his MPs. Photo: RNZ

However, new rules adopted by Labour at its annual conference in Auckland at the weekend means when the leadership comes up for its scheduled review in February 2013 he will need to get 60% of votes plus one more.

To head off Mr Cunliffe's tilt at the job, Mr Shearer will adopt the same rules for the caucus vote at 4pm on Tuesday. If his support falls short of the 60% plus one threshold, he would resign as leader to trigger a vote among the party as a whole.

Mr Shearer's supporters, including senior whip Chris Hipkins, said on Monday that it is time for Mr Cunliffe to put up or shut up.

Mr Hipkins accused Mr Cunliffe of disloyalty, saying the MP for New Lynn has spent the past year undermining Mr Shearer and did the same to former leader Phil Goff, and is clearlycampaigning to be leader.

David Cunliffe told Radio New Zealand's Morning Report programme on Monday that Mr Shearer had his support if there was a leadership vote in the next week or two.

"I rang David Shearer last night and I have left him an assurance of my absolute support. So there is no challenge for Mr Shearer's leadership."

However, he was less certain about whether his support would last until February next year.

David Shearer said on Monday he doesn't have any faith in Mr Cunliffe's assurance and it changes nothing.

"We need to move on this - and it's really not about David Cunliffe deciding what he will and what he won't do.

"What we need to be doing is putting this right behind us. The party needs to move on, we need to be focused on what's important to New Zealanders and not be continually tied up with discussions about ourselves."

Mr Shearer told Morning Report on Monday that he has the support of the majority of his MPs.

After his conference speech on Sunday, Mr Shearer refused to be drawn on any potential contest - except to say that if there is one, it will be on his terms.

"I am the leader. I determine how this party goes forward and what happens in this caucus - it's as simple as that."

Shearer gets Chauvel's support, for now

Mr Chauvel supported Mr Cunliffe in last December's leadership contest, but will vote in support of Mr Shearer on Tuesday.

"I've given him that support wholeheartedly since he became the leader and I hope others do."

But Mr Chauvel refuses to say whether he will vote for Mr Shearer when the leadership comes up for its scheduled review in February.

He says there is no point in crystal ball gazing.