APEC leaders, including Prime Minister John Key, have concluded their meeting in the Russian city of Vladivostok with a pledge to liberalise trade and slash import duties on green technology.

Mr Key says there is a general sense the world economy is "a little fragile", but confidence remains that problems can be overcome, and the 21 leaders agreed this must not be done through protectionism.

The Asia Pacific Economic Cooperation grouping, which includes the world's three largest economies - the United States, China and Japan - accounts for 40% of the world's population, 54% of its economic output and 44% of its trade.

The summit rejected limits on food exports, underlined the importance of open markets to ensure reliable food supplies, and promised measures to increase growth to counter the problems heightened by Europe's debt crisis.

Earlier Mr Key said there was an increasing risk countries would impose new trade barriers if the global economy continued to deteriorate.

He said that would be a step in the wrong direction and he urged trade ministers to heed calls from the G20 group of rich nations to reinvigorate stalled world trade talks.

American Secretary of State Hillary Clinton warned that increasingly tense territorial disputes in the Asia-Pacific are threatening the global economy.

The Japanese and Chinese leaders did not hold their customary talks on the sidelines of the two-day event because of their dispute, and Japan and South Korea also shunned each other.

Mrs Clinton says now is the time for everyone to make efforts to reduce the tension and strengthen diplomatic involvement.

Managing director of the International Monetary Fund Christine Lagarde, who was at the summit, says the priority for Asia-Pacific economies is to remain resilient to external pressures and focus on growth that can benefit as many people as possible.

Mr Key says APEC's work is not glamorous but plays a vital role in making firms in the Asia-Pacific region more competitive.

"There's a lot of work done on well meaning things that can save a lot of money but don't necessarily get a lot of profile - so around supply chains, the recognition of different goods in different markets, behind the border costs."

He says some of these had been quantified as being worth tens of billions of dollars and it could help spur economic growth when the outlook for the world economy is faltering.

Russian president Vladimir Putin has thrown his weight behind a free-trade deal with New Zealand - while also indicating it probably will not be signed until next year.

Mr Putin met John Key for half an hour on the sidelines of the APEC leaders meeting late on Saturday night. 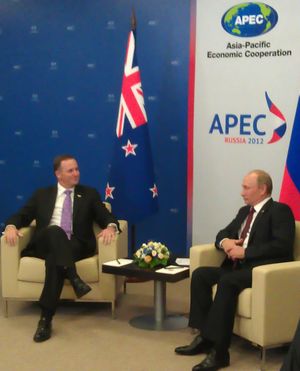 Mr Key described his first-ever meeting with Mr Putin as warm and says the Russian leader indicated a trade deal can be done.

But he says Mr Putin told him Russian farmers are fearful of being swamped by New Zealand imports if trade barriers are scrapped.

Mr Key says Mr Putin will discuss the issue with customs union partners Kazahkstan and Belarus before deciding where the talks go next.

The Prime Minister says by inviting him to Moscow in 2013 Mr Putin is sending a signal Russia wants a deal signed then.

He says other countries lining up to do deals with Russia will have similar demands and it is an issue it must face up to if it wants the benefits of free trade.

American Secretary of State, Hillary Clinton, who was also in Vladivostok, dismissed the Russian proposal for a new United Nations Security Council resolution on Syria as pointless.

Speaking at the end of the summit, Mrs Clinton said a resolution without teeth would be ignored by Syrian President Bashar al Assad.

The Russia Foreign Minister had earlier said his country would push for the adoption of the Geneva communique, which calls for a ceasefire and the formation of a transitional government.

Mr Key says he raised the part Russia is playing in the crisis in Syria with Mr Putin.

Before the meeting Mr Key said he would ask Mr Putin why Russia blocked sanctions in the United Nations against the Syrian regime, which is violently suppressing an uprising of its own people.

Mr Key says Mr Putin pointed out a lot of complexities in the situation in Syria.

He says Mr Putin is committed to doing his best to resolve the situation, but is addressing the issue from a different angle than countries such as New Zealand, Australia and the United States.