Vanuatu's capital of Port Vila has escaped any major impact from Cyclone Donna but the Category-5 storm is continuing on its path towards New Caledonia.

Although Donna is packing winds of up to 300km/h it remains to the west of the central islands. 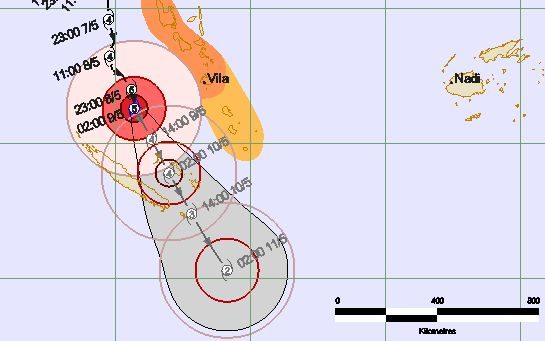 Donna is about 295km west southwest of Vila and 350km west of Erromango.

Vanuatu Met Office forecaster Jerry Timothy said the central islands have been fortunate the system has stayed out at sea.

"Sanma Province and Malampa province, they've experienced a little bit of destructive gale force winds but at this stage it is far west of Port Vila," Mr Timothy said.

"Nothing is happening here, the night is very calm."

Mr Timothy said the system should head into New Caledonian waters within the next 12 hours.

In New Caledonia, a Level-2 alert was in place for people in the northern province and the eastern islands of Ouvea and Lifu. A Level-1 alert was in force for the rest of the country.

Extent of damage in Vanuatu not yet clear

Communication to Vanuatu's northern group of islands remained patchy after the storm swept through, damaging buildings and a cell tower.

Vanuatu's National Disaster Management Office (NDMO) was still trying to assess the extent of the damage, as some remote parts of the northern provinces could not yet be contacted.

NDMO director Shadrack Welegtabit said there were fears for the safety of those in badly affected areas that have suffered damage to housing and crops.

"We still need to get into contact with people in the west coast of Santo. We have not been in contact with them and we are still monitoring the system and the NDMO is still giving out the island messages for what people should be doing on the ground."

Mr Welegtabit said they were making plans for an assessment team to visit as soon as possible when the weather cleared.

"We cannot do any assessment now - both aerial assessment and ground assessment - with the system still hovering in the north. There is still strong gale-force winds around the provinces so it's not safe to send any aircraft or boat in at this stage."

Mr Welegtabit said it was frustrating that teams were unable to be deployed.

"The Red Cross volunteers can't get up there to respond to help these people.

"The government has been unable to do assessments so far, both aerial assessments and ground assessments, as the weather is really bad and the sea is so rough that it just not safe for anyone to be going up to that area, so it is quite frustrating."

After crossing the northern Vanuatu islands and hovering to the west of Torba for two days, Cyclone Donna is now on track to New Caledonia.

A Level-2 alert, which requires people to remain inside their homes or shelters, was imposed in New Caledonia from 7pm local time (8pm NZT) as the storm approached the territory.

This was for people in the northern province and the eastern islands of Ouvea and Lifu.

The rest of New Caledonia was on Level 1 and was being told to prepare for the storm's arrival.

Emergency shelters have been opened across the territory in schools, town halls and gymnasiums.

One town has closed off its water supply to prevent contamination once the cyclone hit.

There were concerns waves as high as 6m could batter the low-lying island of Ouvea early Tuesday morning as rough seas whipped up by the cyclone combined with the high tide. 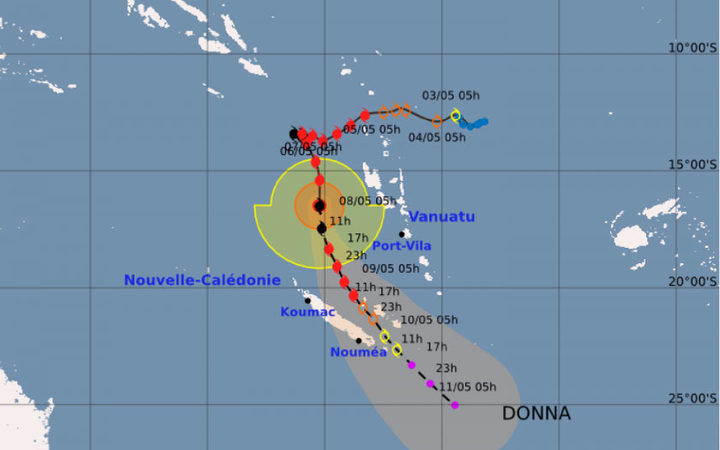 A climate scientist said Cyclone Donna's lateness and intensity was a direct result of a changing climate.

Jim Salinger, from Otago University, said late cyclones such as this one were rare, but not unheard of.

However, he said this one was unusual as the sea temperatures around Vanuatu and New Caledonia were what they would normally be in March.

"Well we're not in an El Niño and we're not in a La Niña, so you would not expect temperatures to be that warm, though they can be on occasions. So what we're seeing happening here is, I'd say, there's a bit of global warming going on," Dr Salinger said.

Dr Salinger said scientific predictions of stronger, more intense cyclones over a longer season as a result of climate change were starting to be borne out.