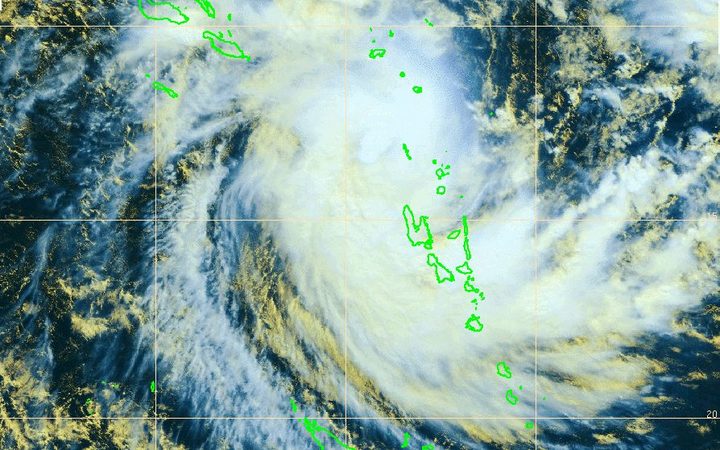 Reports of destruction were beginning to emerge from Vanuatu's northern islands on Friday night as Cyclone Donna continued its slow path across the country, but the rest of the country looked likely to be spared a direct hit.

The category three system was hitting the northern Torba province with winds of 145km/h, gusting as high as 205km/h.

Initial reports from the island of Torres suggested there had been damage, with trees toppled and houses and other public buildings destroyed, according to the government and aid agencies.

On Friday night, the cyclone was about 90km north-northwest of the Torres islands, and moving southeast at about 6km/h.

In Torba, people on Banks and Torres islands were sheltering in caves and evacuation centres.

A curfew had been imposed in the province, where about 10,000 people live, as authorites warned of destructive winds, torrential rain and very rough seas.

The country director of the aid agency World Vision, Michael Wolfe, said he had heard reports of damage from people in the north, although its extent was far from clear.

"We're getting some preliminary reports of trees and houses and churches down," he said. "People are sheltering in the evacuation shelters."

A spokesperson for the Disaster Management Office on Friday night said that it had also received initial reports of damage, but it was too early to gauge the extent of damage as the cyclone would remain in the area overnight.

Earlier on Friday, the office's director, Shadrack Welegtabit said Donna was very slow moving, which was concerning as it could allow it to cause further damage as it lingered near islands.

"The most at risk island currently is the northenmost island of the Torres group. We are currently putting a red alert for them meaning they should remain indoors until we give the all clear for them to do other activities outside their safe areas," Mr Welegtabit said.

Much of the country, which is still rebuilding from the category five Cyclone Pam two years ago, was being warned to be on alert as the cyclone's forecast path continued to change.

Earlier, it was supposed to move down the country towards the main islands of Santo and Efate.

But it has since been tracking towards open ocean in the west and was forecast to make a turn south, possibly back towards southern Vanuatu or New Caledonia this weekend.

A forecaster at the Vanuatu Meteorological Service, Levu Antfalo, said the cyclone appeared to have stopped intensifying -- but its strength wasn't decreasing, either.

Mr Antfalo said that on current forecasts, the cyclone would track west towards open ocean, which could spare the country from the cyclone's direct impacts.

However, he warned the whole country should still expect destructive winds, torrential rain and very rough seas this weekend.

"Some islands, especially on the western side of the archipelago, should be expecting some gale force winds as it transfers along the islands down to the southern parts," he said.

"We're having very heavy rainfall, we have very poor visibility in most of the group. This is something to watch for, especially flash floods."

Authorities were urging people to secure their homes and belongings, and prepare emergency supplies of food, water and sanitary items.

Heavy rainfall and flash flooding was forecast, and people in low-lying areas and close to river banks were urged to be prepared. Coastal flooding was also forecast.

Michael Wolfe said the government was preparing to assess what kind of response would be needed as soon as it was possible to do so.

"That includes assessments to determine the need so that a response can be as rapid as possible," he said. "That is something that is led by the authorities."

RNZ International will broadcast news and cyclone warnings to Vanuatu via shortwave and AM radio. Information on how to listen can be found here.