A river of molten lava continues to make it's way towards the village of Pahoa on Hawaii's Big Island, threatening it's main street.

The lava flow from the Kilauea volcano has been slogging towards the village for weeks at average speeds of nine to 14 meters an hour, and has already overrun a cemetery.

The Hawaii Civil Defense agency says the lava had advanced to within 280 meters of Pahoa Village Road, the main street through the town of about 800 residents.

Pahoa's business district lies mostly to the south of the area in greatest danger.

On Tuesday the molten rock, which topped temperatures of 900 degrees celsius, engulfed a utility shed but spared the adjacent rental house on the property. 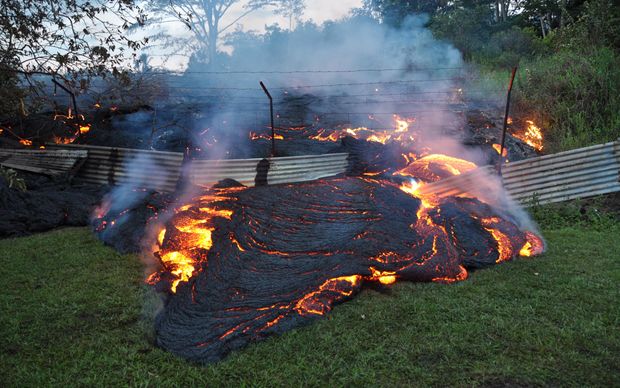 Red-hot lava from a slow-erupting volcano has reached a home on Hawaii's Big Island and is threatening an entire town. Photo: AFP / HANDOUT / US Geological Survey