A village council in Samoa has successfully sought an interim injunction against the use of a title by the editor in chief of the country's daily newspaper.

Savea Sano Malifa, of the Samoa Observer, was bestowed with the Tuamasaga district paramount and kingly Gato'aitele title a week ago. 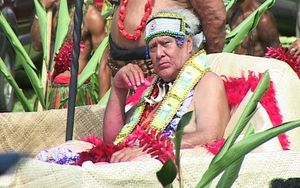 But the Afaga village council successfully applied to the Registrar of the Ministry of Justice, Masinalupe Tusipa Masinalupe, who issued an injunction on the use of the title until it is legally registered.

A high-ranking orator and spokesperson for the village council, Maulolo Tavita, says the way the title was bestowed was not according to protocol, and the bestowal is still in dispute.

Savea has not responded to questions from our correspondent.