It was hard not to feel sorry for Agustin Creevy at the post match press conference last night. The likeable Pumas skipper sat disconsolate, despite the fact that his side had played some excellent rugby, scored some cracking tries and recorded their highest ever score against the All Blacks. 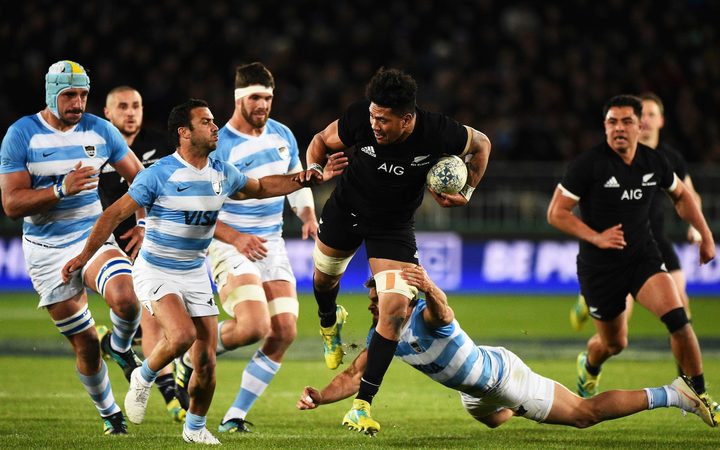 The reason for the glum expression on his face was because it all essentially counted for nothing. The All Blacks had still comfortably beaten the Pumas by 46-24.

During the week, Creevy had charmed the media with his earnest attempts at English and laid back demeanor. However, his disappointment meant he switched back to rapid fire Spanish for the questions directed his way - and you didn't need to be bilingual to understand what he was saying.

Coach Mario Ledesma translated for Creevy, although it was somewhat obvious that he softened at least one terse answer regarding the Argentine mindset at the scrum. Ledesma's English is nigh on perfect, and also gave off a feeling of great frustration. He was upfront about disagreeing with the TMO over a disallowed try, how his side probably needed a bit more self-belief when playing the All Blacks. However, he was polite enough to field yet another innocuous question about the welcome they'd received in Nelson this week without sighing.

It was the scrum that was targeted by the All Blacks, and fair enough too. The once-vaunted Pumas set piece weapon is a shadow of its former self, and has been that way for a good few yeas now. The home side won a string of penalties off that facet and that paved the way for both field position and points.

All that off the back of losing Ngani Laumape in the opening minutes. Anton Lienert-Brown once again proved his value by slotting in to combine with Jack Goodhue, and had another excellent outing.

While Pumas fullback Emiliano Boffelli's opening try will probably rank as one of the best you'll see this year, the patience shown by the All Blacks for Nehe Milner-Skudder and TJ Perenara's answering scores was highly impressive too.

Richie Mo'unga kept the scoreboard ticking over with his goal kicking, but it was Shannon Frizell that stole the show with some powerful runs. It seemed like whatever the Pumas could do, the All Blacks would simply match it straight away in the second half. It was this ruthlessness that meant the scoreline ended up being a blowout.

But the Pumas should feel as though they came away from Nelson with a great deal of respect intact. Nicolas Sanchez was on fire, and proved that he deserves a mention when talking about the most influential players in test rugby right now.

The All Blacks, admittedly, did field an understrength team so his result was always going to have an asterisk next to it. But Mo'unga was solid, Karl Tui'nukuafe prominent, Te Toiroa Tahuriorangi very slick when he came on, and Frizell outstanding. That, more than anything, is what Steve Hansen wanted to see from this side.

But, walking away from Trafalgar Park, it was obvious that the actual occasion was far bigger than any sort of score line or on field storyline. All jokes aside about the constant questioning of both sets of coaches and players about what they thought of Nelson, it has to be said that the city, thanks in part to the stunning weather, did a fantastic job of hosting the test. The streets were full of people leading up to the game, and the temporary stands rocked along to the beat of 21,000 noisy fans.

This was a win on and off the field for the All Blacks, and probably won't be the last time they'll play in Nelson.