By Mazz Scannell for the Wairarapa Times-Age

A dog has been credited with saving the life of a 63-year-old Masterton woman who crashed off the road and spent three nights out in the open before being rescued. 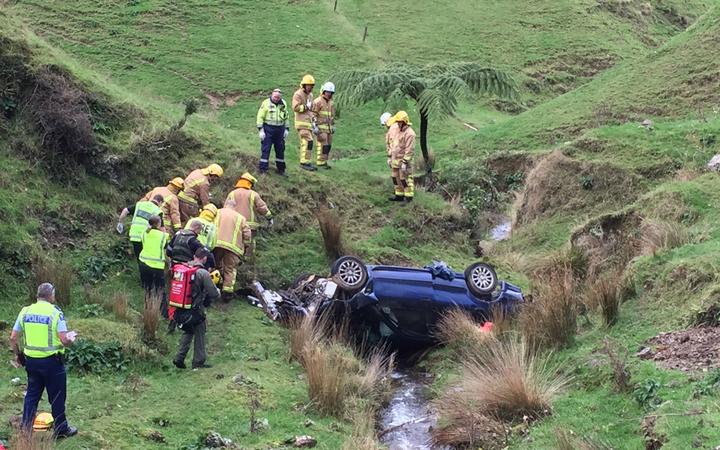 Emergency services at the scene of the crash on Sunday. Photo: Photo / Philips Search and Rescue Trust

Kerry Jordan set out to travel to Palmerston North last Thursday, but her car went off the side on the eastern side of the Pahiatua Track, and she found herself 45m down a steep slope, with a broken ankle and collarbone, and a crushed chest and sternum.

It is understood she dragged herself out the driver's side window and sheltered under a bush with only her faithful five-year-old Border Collie cross Pat for company.

Palmerston North Rescue Helicopter service attended the scene on Sunday afternoon and flew the woman to hospital immediately upon arrival.

A spokesperson said the dog ran away when the helicopter arrived, but they knew he was around because Ms Jordan kept asking for him.

Friend Fiona Northe said she waved Ms Jordan off at 5.30am on Thursday.

Although Ms Jordan had promised to text when she arrived, Ms Northe wasn't too worried when she hadn't heard from her on Thursday but began to worry on Friday.

By Monday, she was very concerned.

Calls and texts to her mobile phone over the weekend went unanswered.

Police advised Ms Northe on Monday that Ms Jordan had been in a crash and was in intensive care at Palmerston North hospital.

"It's amazing that she lived, and you hope that pneumonia doesn't settle in ... but she is pretty strong-willed."

Speaking from Ms Jordan's bedside in hospital, Ms Northe said the police had told her the dog appeared to have kept her warm during the ordeal.

Ms Northe believes Pat sheltered Ms Jordan from the time of the crash on Thursday morning until sometime on Sunday when he got the attention of two passing hikers.

Originally, they thought the car had been abandoned but changed their minds when they saw a dog barking beside the wreck.

Soon after, she was airlifted to Palmerston North hospital where she is in intensive care.

Ms Northe said Ms Jordan was devoted to the dog and referred to it as "her son".

The dog is currently in the police pound in Palmerston North and Ms Northe will bring him home on Monday.

MetService said there would have been rain in the Ballance road area on Thursday, with a low of 7 degrees C on Saturday night.