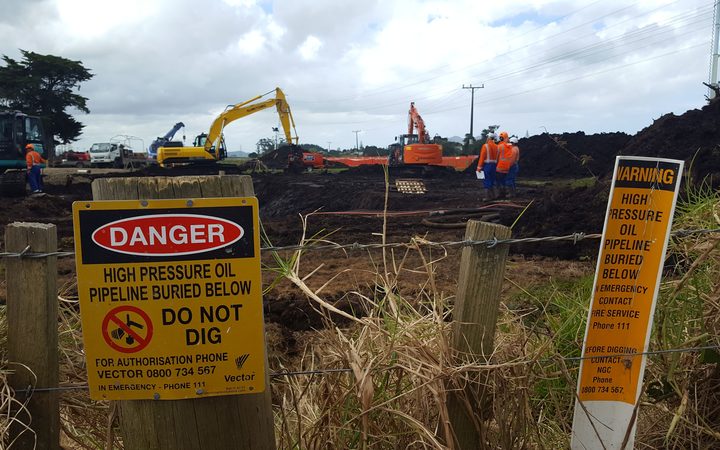 The site where the pipeline was damaged. Photo: RNZ / Lois Williams

The pipeline from the Marsden Point refinery to Wiri in South Auckland carries nearly all Auckland airport's aviation fuel.

Its rupture in September 2017 caused fuel shortages and forced the airline to cancel flights.

Air New Zealand is seeking about $4 million in damages from Z Energy Limited and Z Energy 2015 Limited over the pipeline rupture. It has come to an out-of-court settlement with BP Oil.

An investigation found the pipeline, owned by Refining NZ, was weakened after it was scraped by a digger in the three years leading up to the breach.

Mr Gedye said the companies were aware of vulnerabilities in the pipeline but did not reduce the risk and because they had chosen to carry the risk, they should have to pay the costs.

The lawyer for the fuel companies, Victoria Heine, said attempts to form a written agreement with Air New Zealand to firm up contractual responsibilities were ignored.

"Having for its own reason not taken up the invitation to enter into a written supply agreement, [Air New Zealand] now asks for the court's assistance."

Ms Heine said it was not usual international industry practice for fuel companies to carry all of the risk for disruptions to fuel supply.

"Its effect is to make Z liable for any disruption to the supply chain, however it arises - it could be a tsunami at the refinery or a fire at Wiri. These scenarios involve potentially years of disruption and years of unlimited liability."