Greenpeace's executive director Russel Norman and activist Sara Howell have been discharged without conviction after they disrupted the Amazon Warrior during a protest at sea last year. 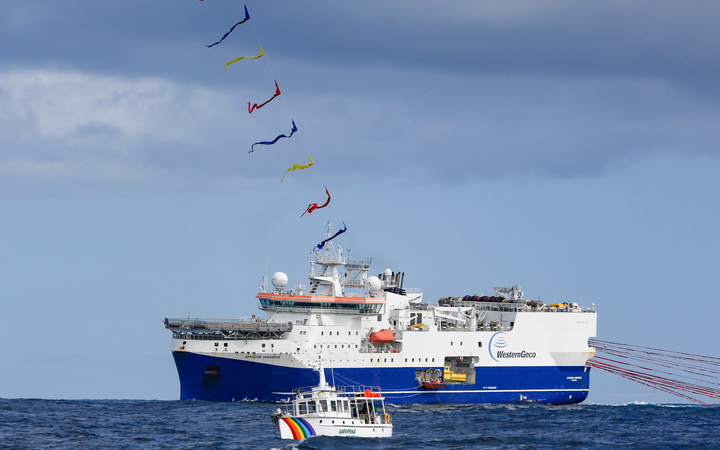 Greenpeace's Taitu and the Amazon Warrior which is searching for oil on behalf of Statoil and Chevron. Photo: Supplied / Greenpeace

The pair intercepted the world's biggest oil survey ship off the coast of the Wairarapa in April 2017.

They applied for a discharge without conviction after admitting the charge in Napier District Court in July.

Charges laid against Greenpeace for the action were dropped by MBIE several months ago after Mr Norman and Ms Howell agreed to plead guilty to the charges.

Issuing his reserved decision Judge Auther Tompkins concluded the gravity of the offending was low and a conviction would affect Ms Howell's visa and employment here in New Zealand and could affect the pair's travel overseas.

"We're thrilled with this verdict. We see this as a major win not just for us, but for the whole movement of people fighting against fossil fuels," Mr Norman said.

Mr Norman said he had no choice but to confront the Amazon Warrior as it searched for oil and gas in New Zealand's seabed.

"As seas rise and extreme weather events become more frequent, we're facing the reality that if we delay climate action any longer, the consequences for us and our kids will be irreversible," he said.

Fellow activist Ms Howell said it had been encouraging to see how effective peaceful protest could be.

"I needed to take action because all of the life on this planet - in its oceans, mountains, rivers, forests, and cities - is marvellous and brilliant. It is delicately balanced and too special to destroy," she said

At the sentencing hearing in July, the Ministry for Business, Innovation and Employment's lawyer, Cameron Stuart, argued for a substantial fine and a community sentence that would reflect the "gravity of their actions".

MBIE had so far spent $18,158 on the prosecution though its legal costs had yet to be finalised, it said.