A teenager who went on an arson spree around Piha last year told police he had a rush of adrenalin when he saw emergency services arrive at the blazes. 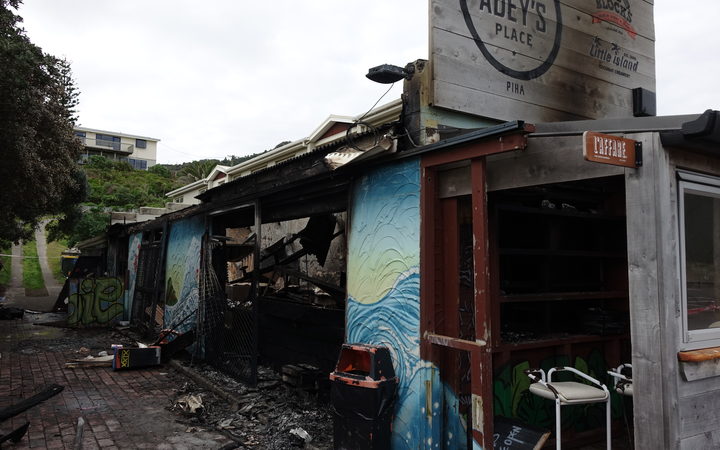 Adey's Place fish and chip shop in Piha was destroyed by a fire started by Marson-Wood. Photo: RNZ / Anusha Bradley

Cory Marson-Wood was today sentenced in the High Court in Auckland to three years in jail for a series of scrub fires in Piha.

One turned into a major blaze, destroying a takeaway store and requiring a helicopter with a monsoon bucket to put it out.

Another was in a paper recycling bin near gas bottles at the Viaduct Events Centre where 900 people were at a function.

Justice Peters said in that case people could have lost their lives.

The court heard how Marson-Wood - who was 19 at the time - was affected by autism, attention deficit hyperactivity disorder and obsessive compulsive disorder, all of which were exacerbated by cannabis use.

His lawyer, Paul Dacre QC, said the fires were not premeditated and his client lit them because he was bored.

But Ms Lummis said Marson-Wood had scoped out the recycling a few times before eventually starting the blaze.

He had told he police 'I was on weed a hundred percent when I started those fires' and talked about the adrenalin rush of seeing the fire service arrive, Ms Lummis said.

Justice Peters said the fire in the takeaway store had been disastrous for the owners, who were not insured, and had cost 14 people their jobs.

The woman who owned the land relied on the lease income and had also lost that, she said.

Marson-Wood had the psychological profile of a 15 or 16-year-old because of his conditions and Justice Peters said she took that into account when sentencing him.

"A lengthy stint in prison can be crushing for a young person, let alone one who is afflicted by personality disorders"

Marson-Wood had several family members in the court, with one woman in tears.

He had no previous convictions but had already spend a year in custody in Mount Eden prison as he waited for the case to go through the courts.