Coromandel and Great Barrier Island are bracing for wild weather this afternoon as Cyclone Hola makes its way down the country. 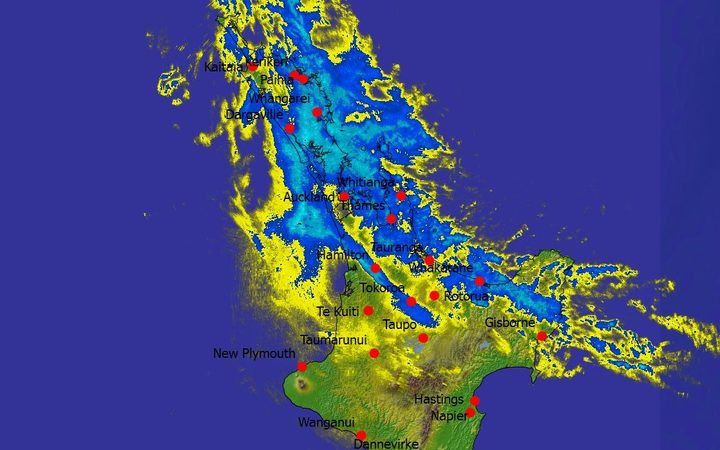 The cyclone is still quite far off the north-east coast of the country and there's only light rain in the eastern parts of Northland.

The heaviest winds and rain will remain offshore, but MetService is warning the east coast of the North Island will get a battering over the afternoon and into early tomorrow.

While rain has been dampening the Far North since early this morning it's not expected to get any worse there as the cyclone moves south.

Winds have picked up in Northland, with MetService recording gusts of up to 120km/hr near Kaeo.

MetService meteorologist James Millward said Great Barrier Island and the Coromandel Peninsula would bear the worst of it this afternoon.

"So as that low gets a bit closer to us, it ... tracks along that northeast coast line, again well off shore, but the closer it gets the more the impact we will feel of it, but really those eastern extremities are where we're going to see the real impact."

Rain is falling over much of the upper half of the North Island now.

Thames-Coromandel District Council Civil Defence controller Julian Snowball said they were in monitoring mode and had been advising locals to tie down loose furniture and move valuables out of flood prone areas.

However, he said they were unlikely to see a repeat of January's severe storm damage and flooding.

Air New Zealand has already cancelled two flights from Northland and says other flights in the North Island may be disrupted later today.

More resources are being sent to small communities on the East Coast above Hawke's Bay which are expected to bear the brunt of ex-Cyclone Hola.

Civil Defence in Gisborne has activated all its civil defence teams throughout the region as the storm's arrival early tomorrow morning coincides with a high tide.

"We have a lot of small towns up there, from Tolaga north and quite a few people, but you know they're always ready, they're ready to react to anything up there."

Farmers with stock near rivers and streams were being warned about the risk of flooding due to heavy rain and the high tide, Ms Bennett said.

Some low-lying streets in Gisborne may also be affected by rising river levels if heavy rain eventuates.

Property owners in the affected areas were being warned about the risk, Ms Bennett said.

But she added that Civil Defence did not want people to become too alarmed because it was uncertain what would happen.

Civil Defence in Gisborne said Cyclone Hola was slowing down and was hitting the area later than expected.

The East Cape is likely to be worst-affected by the storm.

Winds of up to 120-kilometres-an-hour are predicted for north of Tolaga Bay.

The strongest winds are expected in Northland, Auckland, Coromandel Peninsula, Bay of Plenty and Gisborne, and a strong wind warning is in force for these areas.

RNZ reporter Sally Murphy is in Whitianga, Coromandel Peninsula, and said it was pretty grey and drizzly, but there was no sign of a cyclone just yet.

RNZ reporter Shannon Haunui-Thompson is in Paihia, Bay of Islands, and said the rain started overnight and had become heavier in the last hour.

She spoke to residents in the area's east coast, which is prone to flooding, and they didn't seem to be that concerned.

"I think a lot of concern is around the roads," she told Morning Report.

"There is still a lot of road damage from previous cyclones. You can't come through State Highway 1 to Paihia, you've got to go around State Highway 10 because that road is still being repaired from the last cyclone. So this could hold back those repairs."

Eastern parts of Northland and northern Hawke's Bay will see up to 150 millimetres of rain, which could cause flooding and fast-rising rivers.

Wind gusts of 130 kilometres an hour are also likely, along with heavy swell along the eastern coastline from Northland to Gisborne.

MetService said it was likely to be a one-day wonder which would move away from the East Coast on Tuesday.