New Zealanders lucky enough to have been under clear skies overnight watched a blue moon turn into a rare 'super blood moon'.

Between 1am and 4am the moon passed through Earth's shadow, first causing a total eclipse and then giving it a reddish tint, also known as a 'blood moon'. The reddish tint is caused by light being bent in the atmosphere.

The eclipse was visible from the western United States and Canada across the Pacific Ocean to New Zealand Australia and China - wherever there were clear skies - as well as northern polar regions.

Did you catch a glimpse of the rare super moon? Send us your photos: iwitness@radionz.co.nz

Astronomers use the term 'blue moon' because of the rarity of a second full moon occurring in a month - as is the case in North America where it was still 31 January. The small technicality of Pacific time zones meant that in New Zealand it tipped a few hours into February.

Some New Zealanders around the country managed to catch a glimpse.

#SuperBlueBloodMoon just having a quick look at totality before going to sleep! 2nd full moon of the month (i.e. a blue moon) and a total lunar eclipse and a supermoon (Moon at a close to us in its orbit). 3-in-1 (not instant) moon phenomenon! pic.twitter.com/0XsZGveBJC

Not the best capture but there was a small break in the cloud ... then she disappeared.#Supermoon2018 pic.twitter.com/yhshWR2uHv

From Te Mata Peak, the #SuperBloodBlueMoon emerged from behind the cloud pic.twitter.com/C6xgdrkQrc

Some others were disappointed they weren't able to see the moon because of the cloudy skies.

I love clouds, but........Ahead of the much anticipated super moon AND eclipse, this is what typically happens here in the Manawatu, NZ. +Cloud! Any other time, but this! We've had weeks of clear skies. Only hours left before it starts. #weather #supermoon #clouds grrrr.. pic.twitter.com/tkzxLs2aeu 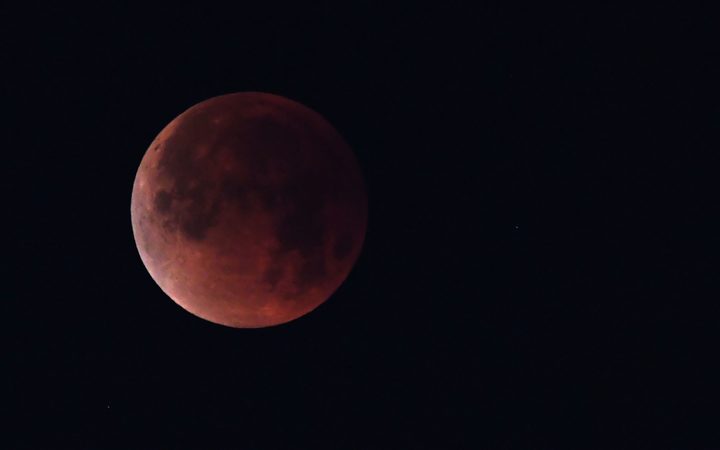 The overlap of a blue moon with a lunar eclipse while the moon is at its closest approach to the earth is the first such celestial triple bill since 1982, said Noah Petro, a scientist at NASA's Goddard Space Flight Centre. A blue moon occurs every two-and-a-half years or so - but it's very unusual that it falls in conjunction with the 'super blood' moon.

Noah Petro said the eclipse was also a scientific opportunity for researchers in Hawaii, who would study what happens to the moon's surface when it quickly drops from 100°C in sunlight to minus 153°C in darkness. The speed of cooling can show what the surface is made of, such as rock or dust, he said.

The lunar eclipse is over, but you can still enjoy the Super Blue Moon! The full Snow Moon typically falls in February, but this year it's in January, which means we can call it a Blue Moon - 2 full Moons in 1 month! In the summery southern hemisphere, enjoy the Grain Moon. pic.twitter.com/suY09oteD5