About 40 protesters have gathered at the property of an Auckland state house tenant fighting to stay in her home of 20 years. 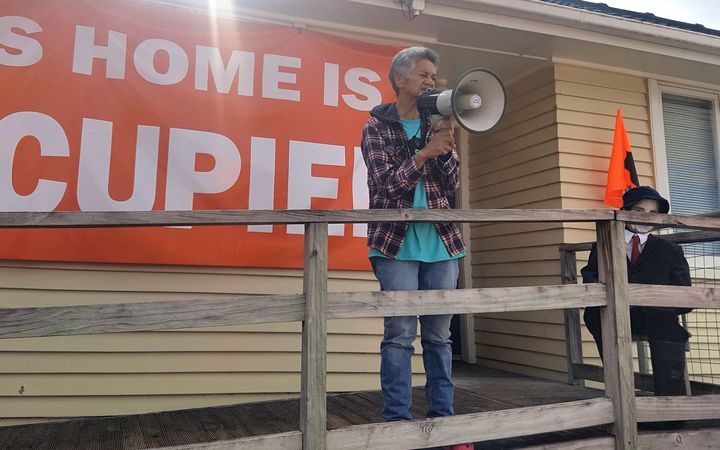 Glen Innes resident Niki Rauti, who has lived in her home for 20 years but faces eviction, said she wanted to stay where she was. Photo: RNZ / Tom Furley

Tāmaki Regeneration Company (TRC) plans to replace 2500 social houses in the suburbs of Glen Innes, Point England and Panmure with 7500 social and private-market houses over a period of 10-15 years.

The company has been trying to evict Ioela Rauti from her Tamaki house and today went to court to get an order to do so.

Ioela Rauti, who is known as Niki, is holding a sit-in with about 40 protesters outside her state home.

She was issued a 90-day eviction notice, which ended last week, at which point supporters joined her at her home on Taniwha Street around the clock.

They have been camped at her property and are hoping to stop any moves to forcibly shift her.

Around 40 people gathered there this morning as TRC went to court for a possession order, which would allow a court bailiff to take the property.

"I'm fighting to stay in the area, it's been a long six years, a lot has happened in six years. We've gotten a bit greyer but the strength is still there," Ms Rauti said.

She said it was an area she felt she belonged

"The reason why I love this area is because my heart's here, my family's here, my support's here, everything I've grown to love is here, you can't buy that anywhere."

She did not want to be a transient tenant, with some families in Glen Innes already relocated since the redevelopment began, she said.

The company said it had offered her five different homes in the last four months.

"Does it beat this one? No. It doesn't. My home's not cold and mouldy as people keep trying to tell me. 'We want to move you to a nice warm blah blah blah blah.' I get sick and tired of it. There's nothing wrong with my home, so why should I move?" 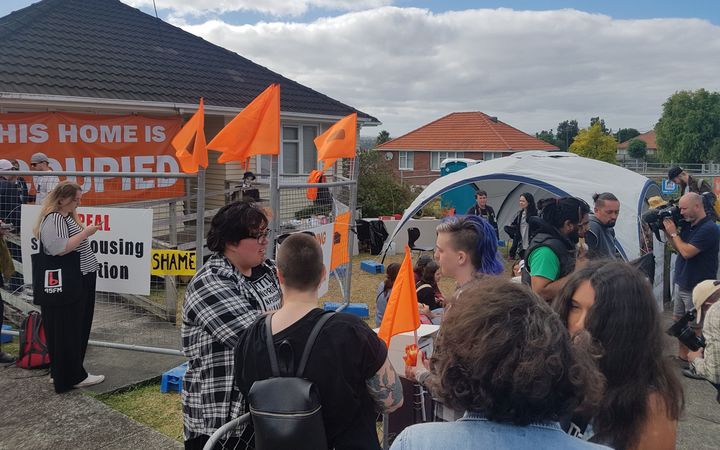 Tents scattered the yard behind her house, with as many as 30 people staying each night since the eviction notice expired last Wednesday. People have also been on hand during the day in case the company tried to remove her.

A supporter and friend at Tamaki Housing, Tere Campbell, said it was sad it had reached this stage.

"They have threatened to bring in bailiffs so we're here to stop that, save her home.

"I'm here to stop them, I'm here to say 'no go away this is her home'. She chose to stay here so we're here to support her staying."

Ms Campbell said the development had already hurt the community.

"It's had a lot of impact, we've seen kids by the buckets and families leaving. Schools have lost numbers and have slowly started clawing their way back. It's hard work. We've always been community, our kids have been safe wherever they go because everyone knows each other ... This is what Glen Innes is, it's a community, it's never been anything but. Now it's lost its feeling of togetherness.

"Keep on going, we'll just keep on going. That's what we do, this is our fight and it's not finished. There are more families and hopefully we can help them but this is the one that's stood her ground and deserves our support, our blessings really."

The company's housing general manager, Neil Porteous, said he hoped she would be in contact so that the company could assist her in moving to the property it had offered her, but in the meantime it was following the legal process.

"TRC works with families and individuals affected by redevelopment to find them a home. This means that people who wish to remain in Tāmaki will have the opportunity to stay in the area," he said.

"We have been in discussions with Ms Rauti about moving to an alternative home in Tāmaki since July 2016.

"Ms Rauti has been offered five properties over the past four months and we are currently holding a new warm, dry home nearby for her.

"We have not received any feedback from Ms Rauti on the houses we have offered her.

"We understand this is a difficult time for Ms Rauti but TRC has been transparent with her about the redevelopment plans and tried to communicate with her at every opportunity."

Mr Porteous said the Tenancy Tribunal had adjourned its decision on the possession order until next week.