A would-be foreign fighter jailed in Australia for trying to leave for Syria is likely to be deported back to New Zealand, but his lawyer says he's no security threat. 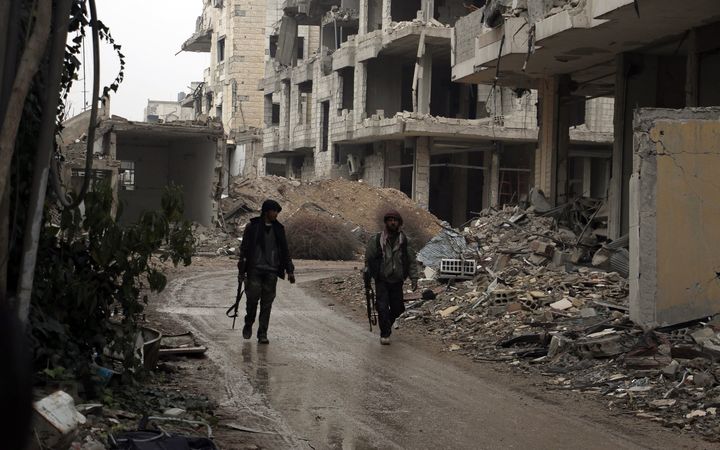 Fighters from the Jaish al-Islam (Islam Army) patrol the front line in Jobar, on the eastern edge of the Syrian capital. Photo: AFP

Amin Mohamed grew up in New Zealand, after coming here as a child with his family as a refugee from Somalia.

He was arrested in 2013 while boarding a plane at Brisbane airport that was bound for Turkey.

The trip was organised by a Sydney Islamic State recruiter who was now behind bars.

Mohamed was sentenced to five and a half years in prison, but because of the time already spent in jail he was expected to be released next year.

His lawyer, Jessie Smith, said he was likely to be sent back to New Zealand.

"The starting position, usually upon the commission of these kinds of criminal offending is that you are immediately deported. Since his immediate family is in Australia, he would like to stay in his community here, he has very strong ties."

Ms Smith said Mohamed regretted his actions, saying it was the biggest mistake of his life.

She said he was not dangerous.

"These are not terrorism charges. It is not our assessment, or the assessment of the judge that he poses any kind of violent extremist threat to the Australian or New Zealand community. That wasn't what this prosecution was about."

Ms Smith said Mohamed disputed the charge against him.

"His defence was that he was not going to fight, that he was performing hegira, which is an Islamic concept - if you migrate for the sake of Allah, your sins will be wiped clean. The jury did not accept that evidence and found him guilty of going to Syria with the purpose of engaging in hostile activities."

The Federation of Islamic Associations (FIANZ) said it will be monitoring and trying to help Mohamed if he was sent to New Zealand.

President Hazim Arafeh said if he settled here, it would work with the local community to help him.

"We as FIANZ, we keep these people always monitored, and we also engage with them to correct the wrong ideology that they have been attracted to."

Mr Arafeh said the level of risk was much lower in New Zealand compared to Australia.

Waikato University law professor Alexander Gillespie told Morning Report the main threat was from returning fighters with knowledge of how to commit crimes.

Prof Gillespie said an attack in New Zealand could not be ruled out, but it was a small risk.