When my wife addressed me over breakfast this morning she said, essentially, this: I'm sick to death of the All Blacks. I can't wait for Dan Carter to go to Paris. 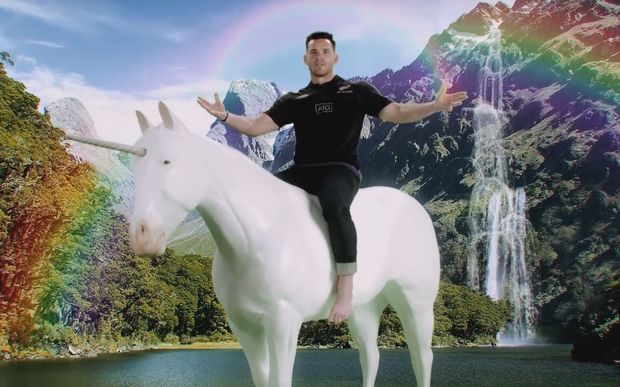 Her underlying point was she is over the media coverage of the Rugby World Cup, and, more particularly, the All Blacks final against the Wallabies on Sunday. (She still wants us to win, though.)

She's not the only one, with recent surveys showing only about a third of New Zealanders can be bothered with the it all.

However, there are a lot of fans whose devotion can drive them to somewhat bizarre lengths.

Holly Kenyon tweeted RNZ to highlight her song - which is sure to become a YouTube classic - in support of Richie McCaw and company.

An Englishwoman who lives in Wales but has always supported the All Blacks, she leaves nothing behind in her homage to the boys in black.

Take a look at the lyrics: "Full of awesome, Dan Carter is sweet as. Kicks the ball in between those two white posts. He's never missing. His shirt reads 10 but he's number one. Oooooooh!

"Bend your knees, slap your thighs, stick your tongue out and say, take a tip from the Kiwi boys, they'll make you scream for more."

All that is a missing is a picture of Carter in his undies. But it's still a treat, knowing winks, haka and all.

It's natural, of course, that McCaw should be compared to one of our other great exports:

...while some have a deeper love:

And then there is the seemingly inexplicable:

My reply-snaps this morning have been adorned in black & what a day to be a Sportsball fan tbh @AllBlacks #RWC2015 pic.twitter.com/7vJRnFJJMK

Meanwhile, national airlines Air New Zealand and Qantas have been engaging in some light-hearted pre-match banter.

.@Qantas So we’ve been thinking about this wager. How about you paint your planes like this? #AirlineWager #NZLvAUS pic.twitter.com/46HhWkVyi7

It all goes to show that whether you're a fan or not, there is always some joy to be had.