Instead, they dismissed them out of hand, the human rights advocacy group says. 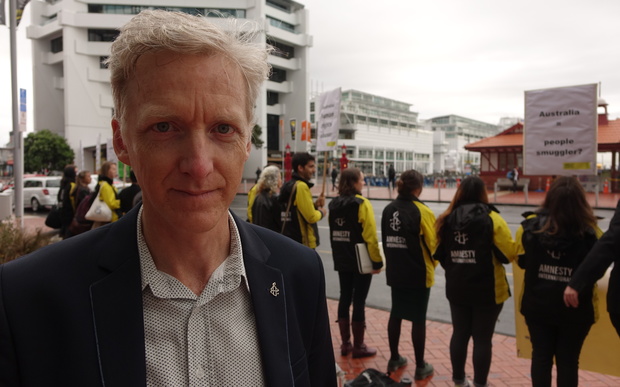 Amnesty International handed a copy of a report it released yesterday to the Australian consulate in Auckland this morning.

The Amnesty International report contains witness accounts from crew and passengers on a people-smuggling ship.

Witnesses said that government officials gave the crew US$32,000 when Australian navy ships intercepted the boat in May.

The boat then returned to Indonesia, where the asylum seekers and crew were detained by Indonesian officials.

After the boat was intercepted, about 50 of the asylum seekers were detained aboard the navy vessel for a week, where they were denied medical assistance and had their possessions confiscated, the report said.

Australia immigration minister Peter Dutton dismissed the report yesterday, calling it a disgrace and saying the government would not be bullied by advocacy groups.

But Mr Bayldon said the claims were consistent across all the asylum seekers and crew members, and should be investigated.

"All we've heard ... is defensive political bluster - really nothing that addresses the very serious claims of the government being involved in transnational crimes."

An Australian parliamentary committee was already investigating the claims, which first came to light in June, and was due to report back in February next year.

That should be stepped up to a royal commission of inquiry, Mr Bailson said.