A ship's master has become the first seafarer in New Zealand to be charged and fined for operating a vessel with excess breath alcohol. 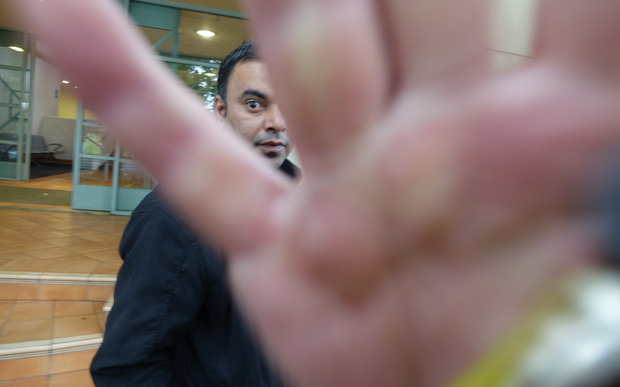 An agent of the ship's owner put his hand over a Radio New Zealand camera lens outside court today. Photo: RNZ / Natalie Mankelow

Mumbai-based Pramod Kumar, 36, is the master of the 38,000 tonne African Harrier, a fertiliser ship which arrived at Port of Tauranga on Friday.

He pleaded guilty to the charge, brought under the Maritime Transport Act, and was fined $3000 plus $130 in court costs when he appeared at the Tauranga District Court today. 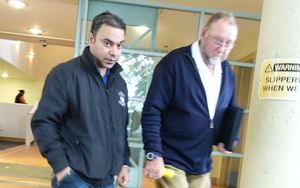 Court documents suggest Kumar attempted to perform designated safety duties while having an alcohol breath level of 1229 micrograms of alcohol per litre of breath. The limit for seafarers is 250 micrograms.

Judge Robert Wolff said Kumar was five times over the legal limit and the potential consequences were significant.

He said he could have put the crew and the public at risk. He also said there were environmental concerns because of the type of material the ship was carrying.

Duty lawyer Kate Anderson told the court Kumar had been in the shipping industry for 20 years and had been a master for the last five years.

She said he had been on the ship for 47 days, during which they experienced rough weather caused by Cyclone Pam.

Ms Anderson said Kumar left the boat Saturday and was breath-tested by police on Sunday.

A port staff member, who boarded the ship to guide it out to sea, noticed the master was under the influence and called Maritime New Zealand, who then called police.

Another lawyer for Kumar, Nicholas Dutch, said if Kumar had stayed in bed, he would not have been seen as being in charge of the ship, but because he was on the bridge he was legally in charge.

The ship's owner, MUR Shipping, said it would undertake a review with Kumar. Ms Anderson said she was unsure if he would be able to maintain his employment.

He is expected to pay the fine and fly out of New Zealand today.

MUR Shipping had indicated it would seek name suppression at a later court hearing, to try and stop media publishing its details, but that suppression was not sought.

Outside court, a Tauranga-based agent for MUR Shipping tried to stop media from taking photos.

Maritime New Zealand has welcomed Kumar's sentencing, and said the prosecution and sentence should send a strong message to the industry.

The regulator's director Keith Manch said it would not tolerate such conduct from a ship's master.

Mr Manch said the successful prosecution was the result of co-operation between Port of Tauranga, the pilot, Maritime New Zealand and police.

An amendment made to the Maritime Transport Act in October 2013 means seafarers can now be charged with a specific excess breath alcohol charge if they exceed specified alcohol limits.