Federated Farmers says complaints made by a columnist, who says she received a hateful reaction to a column she wrote, are serious and should be handled by police.

Rachel Stewart has said she received threats of sexual violence from leaders in the agricultural community following the publication of her column in two newspapers. 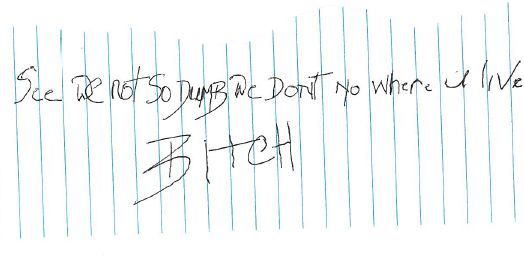 The note Rachel Stewart says she received in her mailbox. Photo: Supplied

In the column, she responded to a Federated Farmers claim the environment Court treats farmers worse than murderers and rapists.

She said she went to police on Thursday after receiving a threatening note in her mailbox and sexual insults on Twitter.

Federation spokesperson Don Carson said he did not see any threats online and as such the organisation was not in a position to confirm any threats were made or who had made them.

He said the organisation regarded any threat towards a person's safety as serious and said the matter should be handled by police.

Ms Stewart, a former president of Federated Farmers in Whanganui, said she was concerned about the state of the industry if this is how it responds to criticism.

"I think it's in big trouble, because if that's the level of debate we've got big problems.

"You can tell me you don't like my writing, you can call me anything you like. But when you don't talk about the issues, I'm not going to respect that."