Safety standards have been scrapped for one of the most dangerous children's toys at the time of year when injuries are most likely to occur. 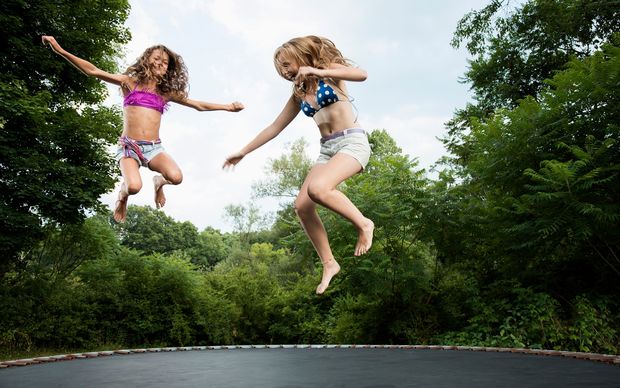 Trampolines sold in New Zealand are no longer subject to a safety standard. Photo: Source

Child safety advocates say that could open the door to cheap, unsafe imported trampolines and are calling for tougher, mandatory standards to fill the gap.

Trampoline injuries put more than 300 children in hospital each year, mostly during summer.

Safekids Aotearoa director Ann Weaver was surprised to find out just before Christmas that the trampoline safety standard had been withdrawn by Standards New Zealand, with nothing to replace it.

Although the standard dated back to 1997 and was overdue for review, she said withdrawing it was "very short-sighted".

"I do believe, particularly in New Zealand here where there are such a high number of trampolines, that we definitely need a trampoline standard."

"However in saying that, going forward if we don't get a new standard there is that concern, distributors in New Zealand could import trampolines that don't meet any particular standard."

The inventor of the Springfree trampoline, Canterbury University engineering professor Keith Alexander, does not think the lack of a New Zealand standard will make much difference for a few months at least.

Because it was only a voluntary standard, he said, unsafe trampolines were already being sold here.

Some trampolines were definitely safe, he said, but others brought into the country had not bothered to comply with any standards.

Almost half of trampoline injuries are from children falling off or hitting the frame or exposed springs.

Professor Alexander said the biggest risk was from cut-price, imported trampolines that used the cheapest materials.

After three months in the sun with New Zealand's high UV levels, the net and pads start to fall apart.

"And then the trampoline sits there without any of the protective equipment on it and for the next three years, it's a hazard for children jumping on it."

Australia is due to publish an updated trampoline safety standard around Easter and Safekids wants it to be adopted here, and made mandatory.

Professor Alexander agrees. He was on the Australian review committee and said it tightened up ultraviolet protection standards for nets and pads.

"It also says any trampoline that's sold should have an enclosure, a net around it and it should have pads that comply with certain tests."

The Ministry of Business, Innovation and Employment said it was already talking to Australian counterparts about adopting the updated standard.

A senior advisor for trading standards, Martin Rushton, said the ministry would also look at whether to make it mandatory.

However, he cautioned that a trampoline that is safe in terms of design and construction could still be made very unsafe unless it was properly assembled and maintained, located correctly and children were supervised.