The writer Jean Watson, best-known for her novel Stand in the Rain, has died in Wellington.

She died peacefully in Wellington Hospital yesterday morning with her son, Harry, by her side. 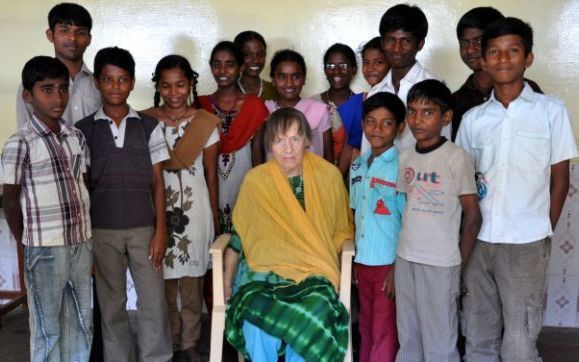 Jean Watson with children from The Karunai Illam in South India. Photo: Supplied

Her first and best-known novel, Stand in the Rain was published in 1965, and was partly based on her marriage to the writer Barry Crump.

Watson also published several other novels and, in 1992, Karunai Illam: The Story of an Orphanage, an autobiographical account of her involvement with the founding of an orphanage in southern India.

Fondly known as 'Aunty Jean', Watson was revered in Tamil Nadu where in 1984 she decided to help a local man start an orphanage.

Since then a school and a community college have also been built.

Her son Harry said it started with a spur-of-a-moment decision.

"She met someone on a bus, and he said he was starting an orphanage, did she want to come and see the children? And that's where it began.

"She'll be highly-revered. The children all love her, they'll be very sad."

Watson was born in 1933 and brought up on a farm near Whangarei, she had lived for many years as a freelance writer in Wellington.