The biggest street works yet in preparation for Auckland's downtown rail tunnel are getting under way. 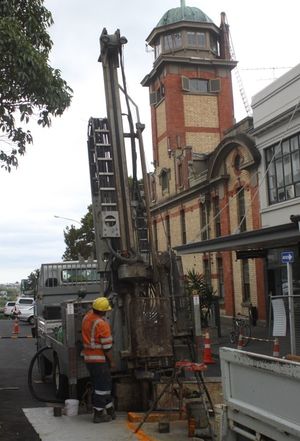 Auckland Transport will drill for a month near the site of the proposed Karangahape Road station to check groundwater around the construction area.

The work will close part of Beresford Street for two months and follows the drilling of 127 boreholes along the route of the City Rail Link to test the make-up of the soil.

The agency said there is a 12-metre-thick layer of sandstone through the area. The test would monitor how that and groundwater might affect the construction of the underground station.

The Auckland Council has yet to decide how to fund its share of the $2.4 billion project, which it wants to start late next year or early in 2016.

The council wants to co-ordinate with a downtown commercial property development on the tunnel route, but the Government's commitment to co-fund the project kicks in only in 2020.

The council said it could afford on its own to build a cut-and-cover section of the route from the Britomart Transport Centre to Wyndham Street and expects to award tenders in the new year to design that section.