A woman allegedly had her car taken at gunpoint in the Hamilton suburb of Chartwell this afternoon. 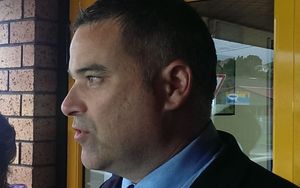 Detective Inspector Karl Thornton said the woman was allegedly approached by a man she did not know as she was getting into the vehicle about 3pm.

""She was just hopping into her vehicle to go home for the day and was confronted by a man with a firearm."

The man took her vehicle and it was next seen in Huntly about 4pm.

Police pursued the car, which failed to stop despite road spikes being used at Ngaruawahia. However, it then hit a marked police car, and the driver was arrested.

No one was injured during the incident but the woman was shaken in what Mr Thornton said was a "traumatic event for her".